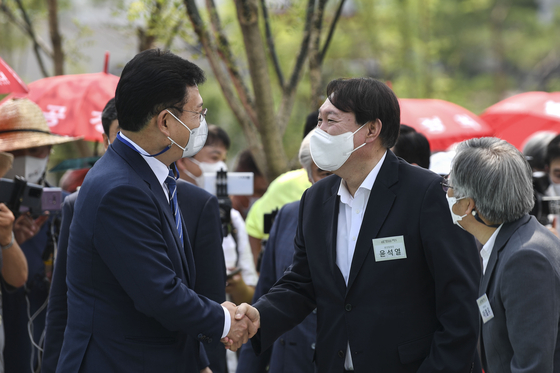 In this file photo, former Prosecutor General Yoon Seok-youl, right, shakes hands with Democratic Party Chairman Song Young-gil at the opening ceremony of the memorial of the independence fighter Lee Hoe-young on June 9, 2021, in Seoul. [NEWS1]


Opposition leaders on Monday defended former Prosecutor General Yoon Seok-youl from the ruling party politicians’ claim that they are in possession of secret information that could destroy any shot he has at becoming president.

“We experienced strong turmoil over the weekend after [Democratic Party, DP] Chairman Song Young-gil mentioned the so-called X-file against Yoon,” Lee Jun-seok, chairman of the main opposition People Power Party (PPP), said Monday. “It is necessary to examine presidential candidates, but talking about an 'X-file' without giving specific information only exhausts the people and triggers irritation toward politicians.”

Since last month, Song said he has been creating a file against Yoon by collecting suspicions surrounding the former prosecutor general, who became the presidential frontrunner of the conservatives.

In his interview with the JoongAng Ilbo on Thursday, Song called the file of alleged secrets "Yoon's X-file," and it will soon be laid bare during the primary process of the opposition party. Song, however, did not elaborate on any specific accusation.

Jang Seong-cheol, a political commentator and former aide to conservative heavyweight Kim Moo-sung, fueled the controversy. In a Facebook posting, Jang wrote on Saturday that he had obtained a file of documents that listed suspicions surrounding Yoon, his wife and mother-in-law, and the contents were serious enough to end any of Yoon’s presidential dreams.

“As someone who earnestly hopes for the opposition’s presidential victory, I had high hopes for Yoon, but I have come to the conclusion that it will be extremely hard for him to win due to all those suspicions,” Jang said.

Although Yoon is yet to join the PPP’s primary, leaders of the largest conservative party on Monday increasingly defended Yoon.

“If anyone knows what is in this so-called X-file, and if there are any criminal allegations [against Yoon], please take it to the investigative authorities for a fair probe,” PPP Chairman Lee said.

Rep. Kim Gi-hyeon, floor leader of the PPP, also condemned the DP chairman for repeating its past history of launching a dirty smear campaign against an opposition presidential frontrunner. He likened Song to Kim Dae-yeop, who raised a false accusation during the 2000 presidential election that Lee Hoi-chang's son had dodged the military draft. Lee never recovered from the scandal, and Kim was later convicted of making public false information, after Lee lost to Roh Moo-hyun.

Rep. Cho Soo-jin, a member of the PPP Supreme Council, pressed Song to make public all allegations, instead of making groundless suggestions to influence public opinions.

“The ruling party must also remember that you are actually spitting on the face of the Moon Jae-in administration, since Moon had hired Yoon as the head of the Seoul Central District Prosecutors’ Office and as the prosecutor general despite the so-called X-file, if this thing is even real,” she said.

People’s Party Chairman Ahn Cheol-soo also commented Monday that the DP has started using political tactics against opposition presidential candidates. “When one candidate falls, they will attack the next target and then the next,” Ahn said.

Ahn also said Song must make public the X-file, if it exists. “And if his announcement contains any any false information or exaggeration, he should be held politically and legally responsible,” Ahn said. “Yoon also needs to explain his position about any allegations and act responsibly.”

Yoon’s aides said Monday that he will not respond to any unsubstantiated accusations.

Meanwhile, Yoon recruited Lee Seok-jun, former minister of government policy coordination, to support his campaign. Lee, 63, is a former public servant with more than 30 years of experience in the government, particularly in the area of budget affairs.

Lee served as the vice minister of finance, vice minister of science and minister of government policy coordination in the Park Geun-hye administration. Yoon’s recruitment of Lee is expected to dilute the Park loyalists’ disapproval for his past as a prosecutor who investigated and detained the former president.

More details about the polls are available on the homepage of the National Election Survey Deliberation Commission.