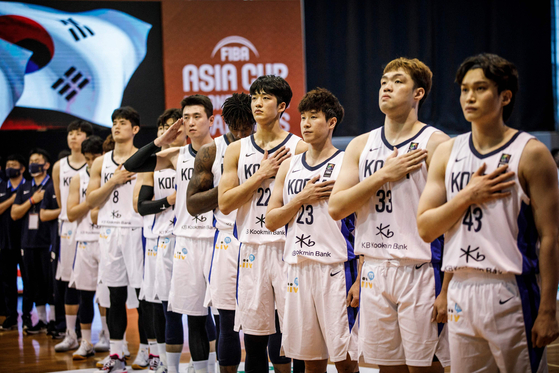 The Korean basketball team stands for the national anthem during a FIBA Asia Cup qualifier against the Philippines on Wednesday in New Clark City, the Philippines. [AFP/ YONHAP]


The Korean men's basketball team has qualified for the FIBA Asia Cup 2021, to take place in Indonesia from Aug. 16 to 28.

Korea was one of 24 teams competing in the qualifiers. Teams were divided into six groups of four, with each team playing the three other teams twice on a home and away basis, and the top two teams from each group qualified.

Due to the Covid-19 pandemic, games were delayed last year and eventually played in a bubble in the Philippines.

Korea qualified after finishing second in Group A alongside the Philippines, who came in first. Indonesia finished third and Thailand fourth.

The national team now heads to Kaunas, Lithuania, where they will attempt to win at least three games at the FIBA Olympic Qualifying Tournaments to earn an Olympic berth.