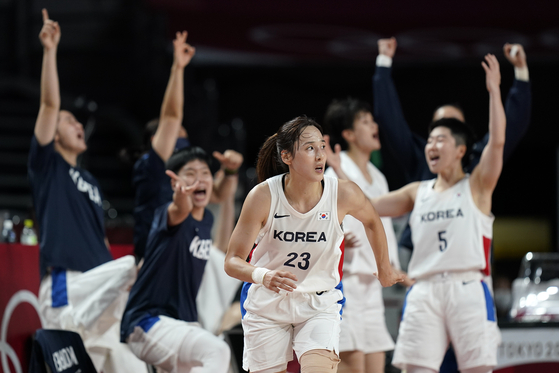 Kim Dan-bi turns back up court as teammates celebrate her scoring during a women's preliminary round basketball game against Serbia at the 2020 Summer Olympics on Sunday in Saitama, Japan. [AP/YONHAP]


The Korean women's basketball team was handed its third and final loss at the 2020 Tokyo Olympics by world No. 10 Serbia at Saitama Super Arena, central Saitama, on Sunday evening.

With the close 65-61 final score, Korea has now lost to everyone in Group A — Spain, Canada and Serbia — failing to advance to the quarterfinals.

Korea trailed behind Serbia for the first two quarters, unable to take a lead at any point in the first 20 minutes. The first quarter finished 17-10, with Korea seven points behind Serbia, and in the second quarter, the point difference widened to 10, twice.

The first half of the game ended 32-24. Korea had two two-pointers as opposed to Serbia's 11, but Korea had more three-pointers, scoring four in the first half while Serbia only had one.

The biggest problem was that Team Korea made more mistakes, losing possession even before a shot was attempted. Korea was charged with more turnovers, 10 to Serbia's eight, which Serbia capitalized on, adding 10 points. 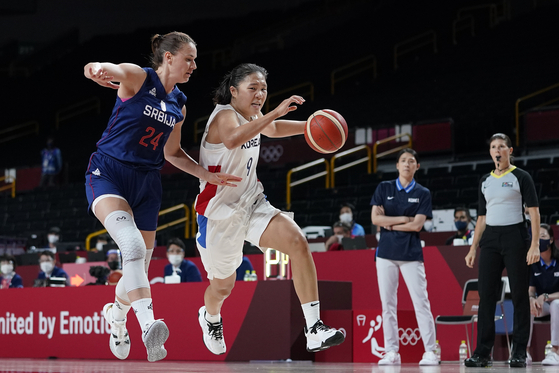 Park Ji-hyun drives against Serbia's Maja Skoric during a women's preliminary round basketball game at the 2020 Summer Olympics on Sunday in Saitama, Japan. [AP/YONHAP]


Korea attempted to rally, but Serbia quickly found their feet again, scoring six points in a row to end the third quarter up six points. In the final quarter, Korea put up a good fight until the very end, with Park Ji-su, Park Ji-hyun and Kim Dan-bi all scoring three-pointers, allowing Korea to outscore the Serbian team for the first time by three points.

But with just two minute and 32 seconds on the clock, a foul from the Korean side gave up two free throws, allowing the brief three-point lead to slip away. With just another minute on the clock, Serbia scored three more points to lock in their win. The final score was 65-61. 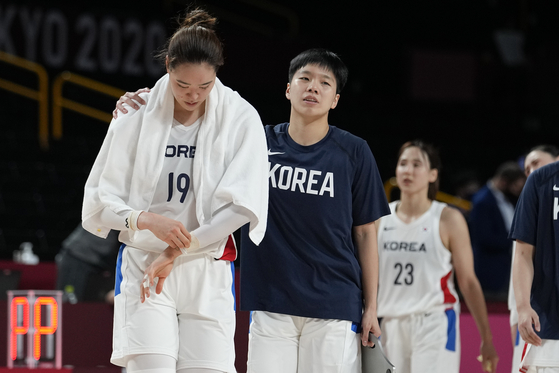 The Korean national basketball team players walk off the court after losing to Serbia 65-61 during a women's preliminary round basketball game at the 2020 Summer Olympics on Sunday in Saitama, Japan. [AP/YONHAP]


Korea played the preliminaries in group A alongside world No. 3 Spain, No. 4 Canada and No. 8 Serbia and sits at fourth with three losses and no wins.

This year's Games was expected to be a tough outing for the Korean women's basketball team, who made it to the Olympics for the first time in 13 years. Eleven out of the twelve players on the team are playing for their first time in such a big tournament.

After the game against Spain, head coach Chun Joo-weon said she hoped their experience in Tokyo — regardless of how it panned out — would be "only the beginning" for the current group of players, most of whom are young enough to continue representing their country on the court until the next Olympics.