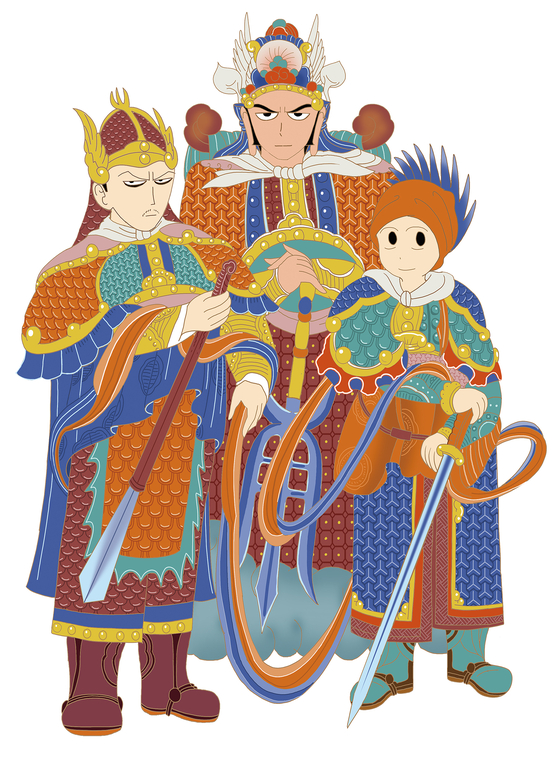 The three characters from Joo Ho-min's popular webtoon ″Along with the Gods: Afterlife″ [SEOUL MUSEUM OF ART]


One of the reasons why Joo Ho-min’s “Along With the Gods” (2010-2012) webtoon series and its movie remake were so popular was because the series was based on Korean folklore, which has not been a common theme in pop culture.

Divided into three main parts, “Along With the Gods” webtoon takes place in the world of myths, the underworld and this world, leading the readers through the Korean traditional tales of the many gods that used to rule the Korean peninsula.

The first two parts of “Along With the Gods” (2017, 2018) film revolve around Kim Ja-hong’s adventures in the underworld, where he is guided by three grim reapers who help him get through the seven hells to successfully reincarnate into human. Ja-hong and anyone else who arrives at each hell’s doorstep must be evaluated for their sins of past lives and be punished according to the gravity of their wrongdoings in order to move to the next hell.

Unlike Greek or Egyptian myths, whose stories have been recorded and passed down in their original form since ancient times, the Korean folklore is a collection of folk religion, beliefs, tales and even foreign religions, especially Buddhism. There isn’t one particular book that holds authority, nor do they exist in a form of religion that people adhere to — making it both a difficult subject to study but an easy source for creators to play around with.

If there are any commonalities, it’s these: There are multiple, if not a myriad of, gods that rule the smallest of details of the world; shamans are the only ones who can understand and pass the words of gods to the laymen; and the powers of the gods depends on the number of believers.

In “Princess Bari” (translated) and “Baekro’s Kitchen” (translated), the story of Princess Bari, who is abandoned at birth because she is the seventh daughter but is later welcomed by her family after she goes to the netherworld to get the elixir for her parents, is used as inspiration for the main characters of both works. In “Princess Bari,” Bari is a god who awaits to fully bloom into a god while helping the people of the Joseon era (1392-1910) as a shaman, whereas in “Baekro’s Kitchen,” Bari is reincarnated as a shaman cook who doesn’t help people out of the goodness of her heart, but demands people pay up in return of her food and services.

A scene from Daum Webtoon's ″Princess Bari″ (translated) series ends with the line, "How can a forgotten god be deemed a god?" [SCREEN CAPTURE]


Many folk-themed webtoons take the traditional motif and twist it by showing characters who do not play by the rules of the gods but rather seek to break them. In “The God’s Birth Palace” (translated), Jeong-in is a goblin who strives to kill the most powerful god in order to set his lover free and comes in conflict with the lesser gods in his venture towards his goal. In “Surindang — Where You Fix Your Scales” (translated), the two sisters who are destined to make clothes for the gods and give birth to daughters who will take on that mission, stand against the gods to defy their fate and walk their own paths.

The overthrowing of traditions doesn’t mean that these works are about denying the past. In fact, recreating old stories and adding new interpretations is exactly how these folk tales have been passed down to our generation. Toppling these old narratives gives them new life, which Lee Myeoung-hyun, Professor of Korean Literature at Chung-Ang University, explained as “the true succession of tradition.” Lee, along with six other Korean literature researchers, recently published a book on webtoons themed around Korean folklore titled “Classic Narratives and Webtoon Storytelling.”

“Korean folklore was persecuted during the Japanese Colonial Rule [1910-1945], which led to our own people looking up to Western culture and belittling our own,” Lee said. “But now, people have come to appreciate the Korean traditions more, which includes the folk beliefs and religions. Many of the stories have certain ‘holes’ that allow room for imagination and that’s why they’re being used more frequently.”

“Classic Narratives and Webtoon Storytelling” takes the examples of “Princess Bari” and other popular works such as “Mystic Pop-up Bar.” Not all webtoons may be high-quality masterpieces that are made after extensive research, but however it’s done, contemporary approach to forgotten stories carries value in itself.

“They don’t have to be exactly the same as how old stories go,” said Lee. “Webtoons aren't meant to be educational. Making changes and adding new elements completes the old stories in a way that suits our day and age.”

[TOONING IN] Knowledge is power in this trending genre of webtoons