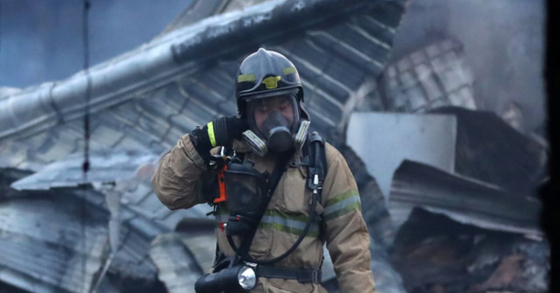 
Jang Joo-young
The author is a national team reporter of the JoongAng Ilbo.

“When I am called to duty, God, wherever flames may rage, give me strength to save a life, whatever be its age. And if according to your will I have to lose my life, bless with your protecting hand my loving family from strife.”

The Firefighters’ Prayer is said to have been written by a firefighter in the United States in the 1950s, but the origin is uncertain. While the author is unknown, all firefighters know the poem. It is the power of empathy. Firefighters around the world run into disaster sites with a similar mindset. Kim Cheol-hong, the firefighter who died in the Hongje-dong fire in 2001, had the prayer on his desk.

Democratic Party lawmaker Oh Young-hwan, a former firefighter, published a book titled “Prayer of A Firefighter” in 2015. He had been dispatched to fire scenes more than 2,000 times. In the book, he wrote, “Who were the people I could not save? I wished I was faster by one minute, or by even one second. I desperately prayed for the slightest hope and was in despair because of the frustration and hopelessness repeated too often.”

We are indebted to the bravery and sacrifice of firefighters. There are many cases of injury and deaths at rescue sites. According to the National Fire Agency’s annual statistics report in 2020, an average 5.4 firefighters died on the job each year over the past decade, with 454.2 firefighters injured. Whenever we hear the news, we respect and thank the heroes and are saddened by the grief and pain the surviving families have to endure.

Recently, we lost another at a fire in a Coupang warehouse in Icheon, Gyeonggi, on June 16. Rescue team chief Kim Dong-sik of the Gwangju Fire Station entered the second basement floor to save lives, was trapped by the fire, and was found dead after 48 hours. He was buried at the Daejeon National Cemetery on June 21.

Praying for the repose of the late firefighter, I want to write his name again to remember his noble sacrifice. Kim Dong-sik was the head of the rescue team at the Gwangju Fire Station in Gyeonggi, and he was 52 years old.

We may have nonchalantly passed by fire trucks with their wailing sirens. Let’s take a moment and pray for their safe return. Writer Kim Hoon wrote in his essay “Making a Noodle Soup” in 2015, “I always send my prayer from the heart to the dashing firetrucks. Save lives and return. And return alive.”