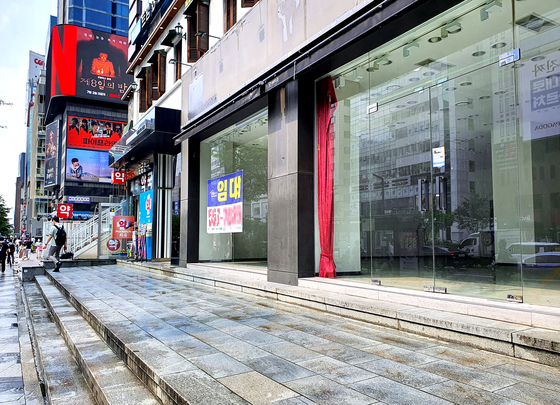 A store located near Gangnam Station is empty, with a sign that says ″for lease″ stuck on the storefront. [HAM JONG-SUN]


Gangnam's main shopping street was hurt by Covid-19 just like the rest of the city, country and world. Many of its stores are empty, and many more are suffering.

But contrary to the laws of supply and demand, there are no signs of rents falling.

“I think there are seven to eight ground floor stores that are vacant right now,” said Mr. Kim, a 68-year-old who has lived some 40 years near Gangnam Station, which has some of the most expensive rents in the affluent Gangnam District of southern Seoul.

“This is the first time in almost 40 years that I’ve seen this many empty stores, even on the ground floor,” Kim added.

Gangnam District boomed as a business and shopping district since 1982, when Gangnam Station on line No. 2 opened.

Ground floor stores are the most expensive. Now many are empty.

According to real estate agents Cushman & Wakefield, buildings located on Gangnam-daero had a vacancy rate of 6.2 percent last year, up 1.9 percentage points from 2019.

“The vacant spaces are where big brands once waited in line to reserve rentals one or two years before a current tenant's lease expired,” said Nam Shin-goo, a senior manager at Cushman & Wakefield. “Brands that saw sales plummet left, and companies that are still wanting to open new stores are taking a conservative approach in choosing locations. So the vacancy rate on Gangnam-daero may likely increase.”

Landlords in many parts of Korea lowered rents during the pandemic to help tenants survive – a win-win situation if the alternative was empty space.

However, Gangnam was an exception.

According to the Korea Real Estate Board, renting a store in the Myeongdong shopping district north of the Han River cost an average 225,000 won per square meter during the January-March period this year, down 24.2 percent on year.

Rents near Gangnam-daero were 104,000 won per square meters on average – up 0.97 percent on year! Compared to the last quarter of 2020, they actually rose 4 percent.

Getting a ground floor store on Gangnam-daero is even more expensive, priced at an average of 302,500 won per square meter. According to real estate agents, this is not much different from a year ago.

“Gangnam Landlords think that lowering rents will pull down building prices, so they refrain from adjusting them despite the low demand,” said Seon Jong-pil, head of Sangga News Radar, a real estate consultation and information service. “This is mostly because there's been a strange phenomenon where building prices rise despite falling rates of investment (ROI).”

Landlords are keeping rents high in the hope that the Gangnam Station area will be the first to pick up post-pandemic. Some analysts say that hope is not groundless.

“Traffic around Gangnam Station is convenient and the area’s cultural appeal will inevitably attract visitors,” said Kim Hyuk, a researcher at KYG Marketing Area Analysis Laboratory. “There are a lot of businesses that are eyeing the right moment to open stores in Gangnam.”

But the pandemic isn't yet over. The number of visitors to the area is still low, and higher labor costs are another obstacle.

According to the Seoul City government, the total number of subway passengers getting on and off at Gangnam Station between January and March fell 21.8 percent on year.


“There seems to be no exit – the coronavirus made people work from home and set limits to operating hours," said a real estate agent who has an office near Gangnam Station.  "People don't spend time near Gangnam station any more. On top of that, the minimum wage is expected to go up next year as well, making things worse.”