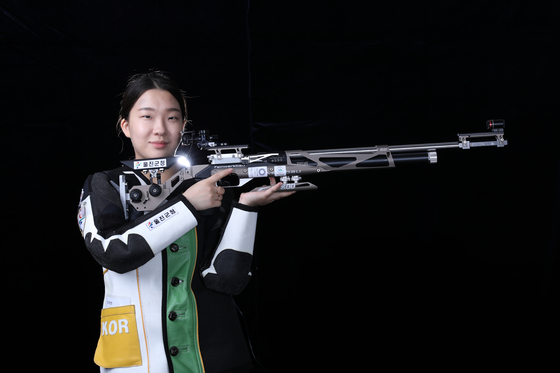 
With 14 Korean shooters warming up for the 2020 Tokyo Games, Team Korea has particularly high hopes for the youngest competitor Kwon Eun-ji, who will compete in both the individual and team 10-meter air rifle events.

The 19-year-old will be competing in the women's 10-meter air rifle alongside Park Hee-moon and the team event with Nam Tae-yun, where Kim Sang-do and Park will also compete as a team.

Kwon first made her name internationally in 2018, when she came in fourth at the 2018 Hungarian Open finals on Nov. 25, 2018. In 2019, Kwon went on to finish second at the ISSF Beijing World Cup, then finish seventh at the 2019 Asian Shooting Championships in Doha, Qatar. She finished fifth at the ISSF World Cup final in New Delhi, India.

Kwon is currently at No. 58 in the world ranking because she failed to participate in international competitions due to Covid-19, but she has been topping the table at domestic competitions this year.

Kwon came out on top of the five national team qualification tournaments that were held from April 16 to 30 at the Changwon International Shooting Range, where 30 shooters who had already made the minimum qualification score compete to earn the two Olympic berths available. Kwon shot a total of 3162.9 points with runner-up Park trailing 20 points behind.

Kwon started out at second on the first round, shooting 631.6 after Keum Ji-hyeon's 632, but shot 632.7 on the second round, breaking a Korean record of 632.5 to take first place. She then went on to the third round of qualifiers to break that new record, shooting 635.3, a score higher than the world record of 633.5.

Even though it technically wasn't a new world record because only international competitions count, shooting over 630 in all five rounds makes her average shot score 10.5, close to the perfect score of 10.9.

This sort of consistency is what could take her to the finals on the big stage, and maybe even to the podium.

The 10-meter air rifle is an event where shooters attempt to shoot a 0.5 millimeter target, which is the size of a mechanical pencil lead.

Yet surprisingly, Kwon does not wear glasses when she shoots even though her eye sight is not all that good. She covers her left eye with an eye patch and aims with her right eye.

But Team Korea has not won a medal in the women's air rifle event since the 2000 Sydney Summer Games, when Kang Cho-hyun won silver, the only medal that Korea won in shooting.

Before Kang, Yeo Kab-soon won a gold medal in the 10-meter air rifle at the 1992 Barcelona Summer Games.

"Yeo won the gold medal when she was a high school student" Kwon told the Joongang Ilbo. "It would be great if I could be the first person in 21 years to win a women's air rifle medal for Korea."

Kwon will make her Olympic debut on July 24, looking to win her very first medal at the 2020 Tokyo Olympics.