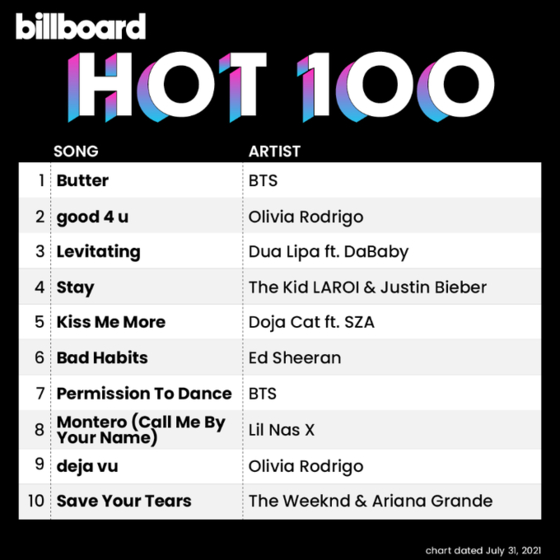 BTS’s “Butter” and "Permission to Dance" switched places for the top spot on the Billboard Hot 100 singles chart. [BILLBOARD]


BTS’s second English-lyric track “Butter” once again switched places for the top spot on the Billboard Hot 100 singles chart with the boy band’s third English-lyric song “Permission to Dance,” according to Billboard on Monday.

“Butter” dropped on May 21 and topped the chart for seven consecutive weeks, but fell to No. 7 after “Permission to Dance” was released on July 9 and entered the chart at No. 1.

This week, “Butter” returned to the top spot while “Permission to Dance” fell to No. 7.

A No. 1 song on the Billboard Hot 100 singles chart being replaced by another song from the same artist has happened 13 times before BTS, but Billboard announced that the boy band is the only artist in the chart’s history to have its previous No. 1 song return to the top spot.

As a result, “Butter” has topped the chart a total of eight time so far, now tying with American singer Olivia Rodrigo’s song “Drivers License” (2021) for the most consecutive weeks on the top spot this year.

With both songs, BTS has been topping the chart for nine weeks in a row. Member Suga wrote “I just woke from sleep… How can this be true… Thank you so much ARMY [BTS’s fans],” on fan community platform Weverse in the early hours of Tuesday.