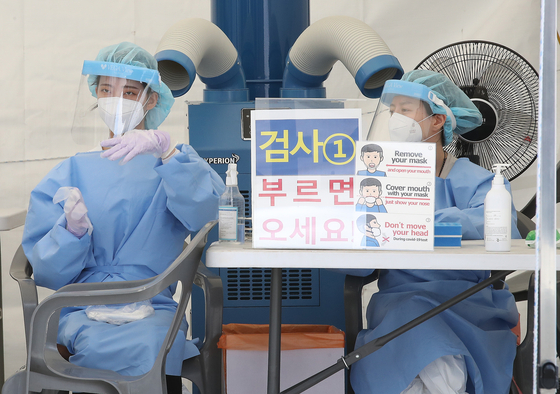 Medical workers get ready to carry out Covid-19 tests at a Covid-19 testing site in Nowon District, northern Seoul, on Sunday. [NEWS1]


With new infections spreading to other regions, all non-capital areas will ban gatherings of more than four people from Monday.

The ban will take effect for two weeks until the first day of August.

"From Monday, the ban on gatherings of up to four people will be issued equally to outside the Seoul metropolitan area,” Prime Minister Kim Boo-kyum said during a Covid-19 response meeting on Sunday.

"At this point, we need a quarantine measure one step ahead of the speed of the virus transmission,” Kim said.

Under Level 2, up to eight people are allowed in private gatherings, and restaurants, cafes, bars and clubs are allowed to stay open until midnight.

However, each city had a different limit on gatherings — four, six or eight — causing some confusion. Moreover, there were concerns over people fleeing the capital region to areas where restrictions are looser.

The greater Seoul area, home to around half the country’s population, has been placed under the strictest Level 4 guidelines since last Monday.

While up to four people can get together during the day, gatherings of more than two people are banned from 6 p.m until 5 a.m. the next day.

With new infections continuing despite stronger virus curbs, the government enforced a four-person cap on gatherings in all regions.

However, gatherings with immediate family members, or with caregivers of a child, elderly or disabled person will be excluded from the count. Exceptions will also apply for people visiting a dying family member.

Amateur sports teams will still be allowed to play if the number of players requires more than four people.

“After collecting opinions from local governments, all agreed to apply the restriction on private gatherings to up to four people," the Central Disaster and Safety Countermeasure Headquarters said, while adding exceptions can be made by each local government reflecting the virus situation in each region.

As the country remains engulfed by a fourth wave of mass infections, Korea’s daily Covid-19 cases remained in the 1,000s for 12 days in a row. 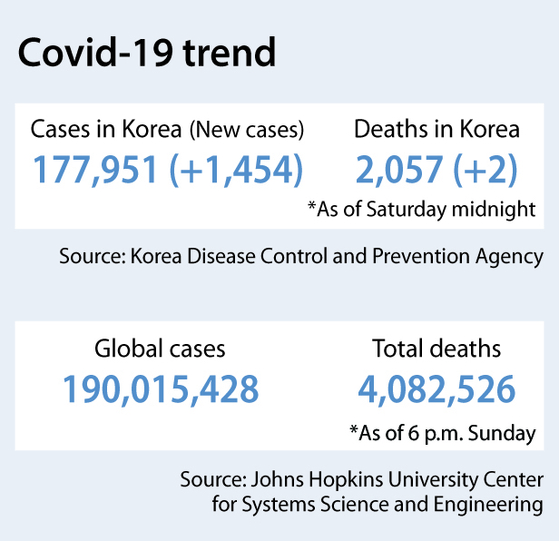 This is the highest Sunday figure the country has ever reported since the start of the pandemic. Sunday cases are usually lower due to fewer tests conducted on weekends.

Patients reported outside of greater Seoul rose to 443 cases, or 31.6 percent of the total — 96 from South Gyeongsang, 68 from Busan and 50 from Gangwon.

The number of confirmed cases in non-capital areas had remained below 200, but recently spiked above 400.

At least three protesters who took part in a Korean Confederation of Trade Unions (KCTU) rally on July 3 tested positive for Covid-19 as of Sunday, raising concerns about further infections.

“After the first infected patient was confirmed on Friday, two more people tested positive on Saturday,” the KDCA said in a press release on Saturday night. “They were all found to have participated in the KCTU rally on July 3.”

Around 8,000 members of the KCTU, the largest labor union in Korea, staged an unauthorized rally in the streets of Jongno, central Seoul, to demand complete revision of the labor law.

Police rejected the KCTU’s plan to organize a rally in Yeouido and blocked the area for fear of Covid-19 infections, but it was held by surprise in Jongno.

After three infected cases were reported on Saturday, health authorities issued an administrative order for all the protesters to take coronavirus tests.

“I deeply regret there were infections among the participants of the KCTU rally, which we had requested several times to be cancelled amid the severe spread of the coronavirus,” Prime Minister Kim said on Saturday after releasing an emergency statement.

While making a public apology, the KCTU said no clear connection has been confirmed between the infections and the rally.

“The government is distorting the facts and slandering the union as if the three infections are related to attendance of the rally,” the Korean Federation of Public Services and Transportation Workers' Unions (KPTU) of the KCTU said Sunday.

Meanwhile, starting Monday, vaccinations for high school seniors and teachers will roll out ahead of the College Scholastic Ability Test (CSAT) in November.

Some 632,000 high school seniors and teachers will get their first Pfizer shots at vaccination centers across the country until July 30.

This is the first time Korea is offering jabs to teenagers.

In a survey held in each school, around 97 percent of eligible students and teachers agreed to get the vaccine.

Reservations for the Moderna vaccine will also begin tomorrow for people in their early 50s.

Those who wish to get shots can make reservations through the national vaccine registration website (ncvr.kdca.go.kr). They can also call KDCA's 1339 hotline or their local government’s call center.

The administration of shots for people between the ages of 50 and 54 will be between Aug.16 and 25.