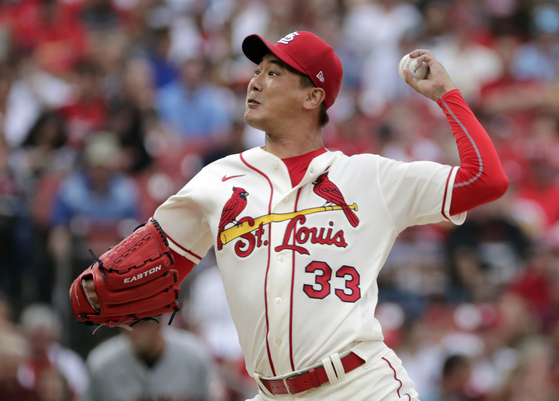 
Kim Kwang-hyun threw six scoreless innings on Saturday to lead the St. Louis Cardinals to a 3-1 victory over the San Francisco Giants and extend his winning streak to four games.

Kim gave up three hits and two walks in six innings, striking out one to push his ERA down to 2.87. His scoreless streak now extends to 21 innings.

Saturday night was a special one for Kim. Not only did he put on another dominant performance on the mound, but he got to do so in front of his wife and children for the first time in his major league Korea.

Having joined the Cardinals last year, Kim was forced to spend the entire season without his wife and children, who stayed in Korea because of Covid-19. He returned in the offseason, but then headed back to the United States without them in the spring. Saturday's game marked the first time his family have been able to attend a game at Busch Stadium in St. Louis, Missouri.

And Kim put on a shot for his family, starting things off with two groundouts before allowing a walk and then capping off the first inning with a lineout. The second was more of the same, with a pair of groundouts and then a flyout to retire the Giants in order.

Kim remained in control in the third, working with his defense to quickly retire the Giants on eight pitches with a groundout, a flyout and a lineout.

The Korean southpaw allowed his first hit in the fourth, a single to Donovan Solano, but immediately shut down any concerns with a very quick forceout and a double play. A single started off the fifth as well, but a pair of flyouts and Kim's only strike out of the game snuffed out any chance of an offensive from the San Francisco side.

A flyout, a pop out and lineout with a single mixed in in the sixth rounded off Kim's game. Kim left the mound with the Cards up three, and although the Giants were able to get one back in the later innings, St. Louis walked away with a comfortable 3-1 win.

Kim's 21-inning scoreless streak is the longest by a Cardinals pitcher this season and the third-longest ever by a Korean pitcher, after Park Chan-ho at 33 and Ryu Hyun-jin at 31.

“Just a pro outing,” Cardinals' manager Mike Shildt was quoted as saying on MLB.com. “That’s why guys start ... He just knows what he's doing out there, he's got good rhythm, keeps guys engaged, works quick, gets ahead in counts. And when he does that, he's super efficient and allows us to go deep in games and throw up zeros.”