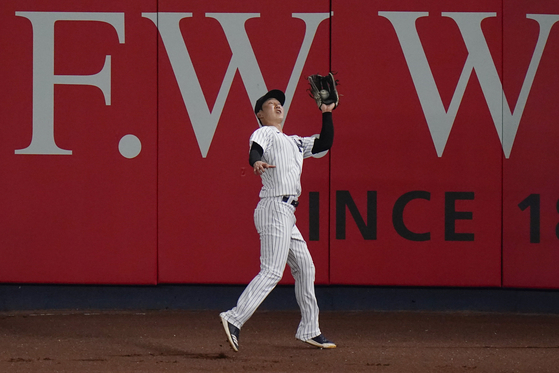 New York Yankees' Park Hoy-jun catches a fly ball from Boston Red Sox's Christian Arroyo for an out during the ninth inning on Friday at Yankee Stadium in New York. [AP/YONHAP]


Park Hoy-jun became the 25th Korean player to debut in the major league on Friday, appearing as a pinch hitter for the New York Yankees in a 4-0 loss to the Boston Red Sox at Yankee Stadium in New York.

Park's sole major league at-bat came at the bottom of the seventh, when he was called on as a pinch hitter for Tim Locastro with runners on first and third. Park swung at the first ball he saw, grounding out to first to end the inning.

He stayed in the game in right field for the last two innings, catching out Raphael Devers at the top of the ninth. The Yankees lost 4-0 having gone down by three in the second inning with the Red Sox adding one more in the eighth.

Park has been playing in the United States since 2015, working his way up through the New York Yankees system before making it to Triple-A for the first time this season.

Typically an infielder, Park graduated from Yatap High School in Seongnam, Gyeonggi, a year behind Kim Ha-seong of the San Diego Padres. The two played alongside each other in high school, with Park ultimately taking over from Kim at shortstop.

Having chosen to battle his way up through the United States system rather than head to the KBO and hope for a shot at the majors later, Park's chance on Friday came after a Covid-19 cluster at the Yankees creates a six-person hole in the line-up. The New York club signed Park to a major league deal and added him to the roster ahead of Friday's game.

Park is the third Korean to play for the Yankees, after Choi Ji-man, now of the Tampa Bay Rays, and Park Chan-ho. There are currently five Koreans active in the majors: Position players, Park, Choi and Kim Ha-seong, and pitchers Ryu Hyun-jin of the Toronto Blue Jays and Kim Kwang-hyun of the St. Louis Cardinals. Yang Hyeon-jong appeared for the Texas Rangers earlier this season, but is currently playing in the minors.