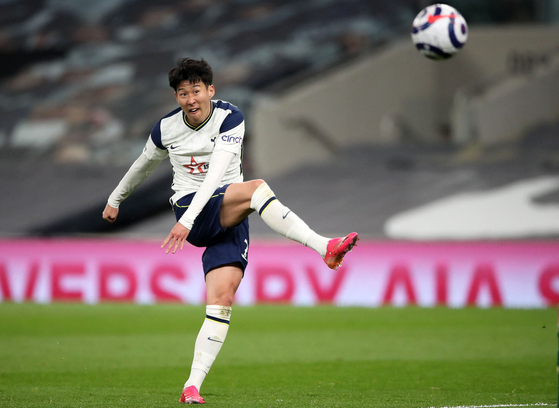 
Son Heung-min has reportedly agreed a £200,000-a-week deal to remain at Tottenham Hotspur, putting to rest fears that he might follow Harry Kane's lead if the England striker leaves the club this summer.

According to Football Insider citing unnamed sources inside the club, Son agreed to stay with the club after talks with new boss Nuno Espirito Santo. Neither Tottenham Hotspur nor Son's management have confirmed the deal.

A new contract for Son has been in the works since last year, although he is still contracted to play at the club until 2023. Son is currently earning an estimated £140,000 ($193,500) per week under a contract signed in July 2018, according to the Guardian. The new deal was expected to increase his salary to about £200,000 a week, which according to Football Insider it has, taking into account his status as one of the top attackers in the Premier League.

The delay in signing the new contract last season was possibly due to Covid-19. With the financial uncertainties created by the pandemic and the image issues of a player signing a multi-million pound deal during a time of such economic hardship, Spurs may have opted to wait for the summer before finalizing a new deal for Son.

In June, Spurs paid back a £175 million loan from the Bank of England, freeing them to sign a new deal with Son.

The money borrowed from the Bank of England was part of a low-interest Covid Corporate Financing Facility loan offered at the start of the pandemic.

When Tottenham took the loan, which was re-drawn in March this year, the club said the money would not be used for player acquisitions. Spurs have stayed true to their word and haven't agreed any big contracts since the loan was taken out.

Kane's future is still uncertain, with the forward having made it clear that he wants to leave the club this summer, but no deal as yet finalized with any other club.