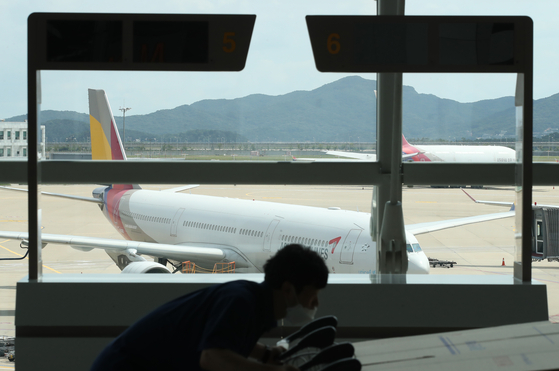 An Asiana Airlines plane is parked at Incheon International Airport on July 14. [YONHAP]


Korea’s first travel bubble-flight takes off on Saturday, with Asiana Airlines 623 leaving Incheon at 9:00 a.m. and arriving in Saipan at 2:30 p.m.

Of the 60 passengers booked on the flight as of Thursday, five are traveling through the travel-bubble program. The Asiana Airlines A321 can carry up to 174 passengers.

Jeju Air 3406 takes off from Incheon at 8:30 a.m. and arrives on Saipan at 2:10 p.m., though the airline could not confirm whether any of the passengers are flying under travel-bubble rules.

A travel bubble is an agreement between two or more countries or regions to allow vaccinated people to travel between them without having to quarantine upon arrival and return.

Korea and the U.S. Commonwealth of the Northern Mariana Islands, in which Saipan is situated, signed a travel-bubble agreement on June 30.

The program only allows group tours arranged by travel agencies.

Travelers taking advantage of the travel-bubble program have to be PCR tested within 72 hours of their arrival on the island. Once there, they receive an antigen test. Results are returned in 15 minutes, and those confirmed negative can travel to certain locations on the island.

Several travel agencies, including Mode Tour and Yellow Balloon, have arranged travel for people on the Saturday flights.

The tourists will be spending most of their time at the beachfront Kensington Hotel Saipan “because people who travel to Saipan usually want to relax and enjoy the facilities at the hotel,” said Yook Hyun-woo, a spokesperson for Mode Tour.

“But they can play golf or visit nearby islands if they want to,” Yook added.

Budget carrier T’way Air is scheduled to fly to Saipan on July 29.

The airline did not confirm the number of seats booked for group tourists traveling via travel bubble program.

"Quite a few of seats are left,” Park Ki-ryung, the company spokesperson, said.

T’way said the flight capacity is 189.

“Three weekly flights will be serving Saipan through around September,” said Lee Ho-jun, a spokesperson for the Ministry of Land, Infrastructure and Transport. “Other than the three airlines that have the approval to fly the flight to Saipan, other airlines may run chartered flights too.”

“The ministry expects more people to travel through the program starting in early August,” he said.

Unvaccinated people can travel to Saipan individually, but they will have to be quarantined for five days in Saipan and two weeks when they return to Korea.