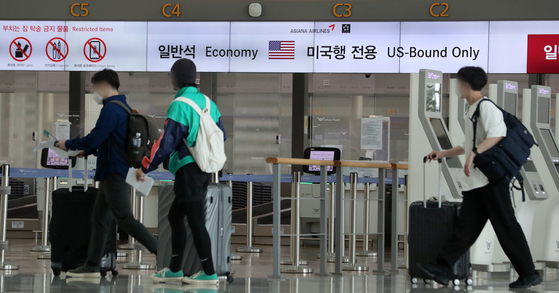 
Local airlines are resuming international flights ahead of the government's plans to announce policies to return life to normal after the pandemic.

The airline hasn't run its Incheon-Honolulu route since April 2020.

In February, Hawaii started allowing travelers from Korea to bypass mandatory 10-day quarantines if they bring negative test result from a list of hospitals designated as "trusted partners."

The flight will take off from Incheon International Airport at 8:35 p.m. and arrive in Honolulu at 10 a.m. local time.

“Korean Air Lines decided to resume the flight thanks to an increasing number of travelers as a result of the [rising] vaccination rate,” said the company in a statement. It added that it will keep trying to resume routes that were suspended.

The number of travelers from Korea to Hawaii jumped 400 percent to a thousand monthly in August from 200 monthly in January.

Asiana Airlines plans to fly its Incheon-Guam route starting in December, although the exact date hasn't been decided.

Guam is the next location the government is expected to sign a "travel bubble" agreement with.

Travel bubbles are agreements between two or more countries to open their borders to travel without quarantines.

The carrier also resumed Incheon-Saipan flights in July. It flies the route every Saturday.

The airline plans to increase Incheon-Saipan flights to twice weekly starting in December.

The number of people who booked Incheon-Saipan trips recently is more than a thousand, according to the airline.

The Korean government signed a travel bubble agreement with Saipan in June and Singapore on Oct. 8.

This came after the Thai government said it would ease entry regulations and exempt people from quarantine as long as they are fully vaccinated starting in November.

The demand to fly overseas is evident in flight ticket sales.

They were up 29 percent compared to the previous month.

Canada, the United States and Vietnam were popular destinations.

Popular destinations in the U.S. were Los Angeles, Atlanta and New York.