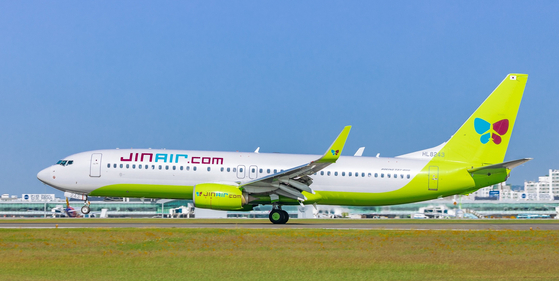 
Korean airlines are introducing special tourist flights around the country, hoping to both drum up business and find a use for planes that have been sat on the tarmac since the Covid-19 pandemic brought the aviation industry to a standstill.


Jin Air is one of the latest carriers to roll out such a promotion.

The budget airline on Wednesday announced that it is introducing a domestic tour program, but with a Hong Kong theme.

Passengers will be given souvenirs related to Hong Kong, like cookies from Jenny Bakery, and take part in a Hong Kong-themed quiz during the tour, which will take off and land at Incheon International Airport on Nov. 14.

Jointly provided with Klook, a travel activities and services booking platform based in Hong Kong, the promotion targets customers who are frustrated that they can't travel overseas, according to Jin Air, which is 60 percent owned by Hanjin KAL.

The special Hong Kong tour will fly 1,270 kilometers (789 miles) across Gwangju, Jeju Island, Busan and Daegu before returning right back to where it started at Incheon International Airport, an hour and 40 minutes after taking off. The elevation of the aircraft will be adjusted during the flight to make sightseeing more convenient for passengers.

It carried 250 passengers on a special program that took in sights such as Baekrokdam, a crater lake on Mount Halla in Jeju Island, with tour guide services provided by the captain.

“Traveling by air isn’t always a transportation means to move from one place to another,” said Jeju Air vice president Kim Jae-chun. People “can feel happy while traveling, and travel itself could become the purpose.”