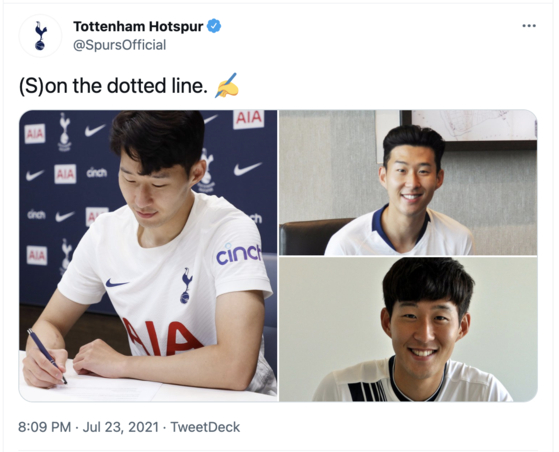 
Son Heung-min has signed a new four-year deal with Tottenham Hotspur, the club announced Friday, finally putting to rest rumors that he might be interested in leaving the club this summer.

Son is one of Spurs top forwards, scoring 107 goals in 280 appearances since joining from Bayer Leverkusen in 2015. He scored 22 goals across all competitions last season, combining with Harry Kane for a total of 14 Premier League goals, a new season record for the most prolific goal scoring partnership ever.

“It was already a big honour to play here for six years, the club have showed me massive, massive respect and obviously I’m very happy to be here," Son said.

“It’s like home, especially with the fans, the players, the staff. There was no decision. It was easy. I’m so happy to be here and will be so glad to see the fans again soon."


Son has already earned his spot in Spurs history multiple times, scoring the first Premier League and Champions League goals at the club's new Tottenham Hotspur Stadium and in 2020 winning the Puskas Award for the single greatest goal in the world for a stunner against Burnley in 2019.

Spurs have faced a difficult task this offseason, with no manager on the books for most of the break, Kane saying he'd like to leave and speculation that Son would follow — although the Korean striker never did anything to suggest he wanted to go.

Spurs now have Nuno Espírito Santo as manager and Son locked in for the net four years. Kane is apparently still keen to leave, but as of press time no deal has been made with only a few weeks left until the 2021-22 season begins.