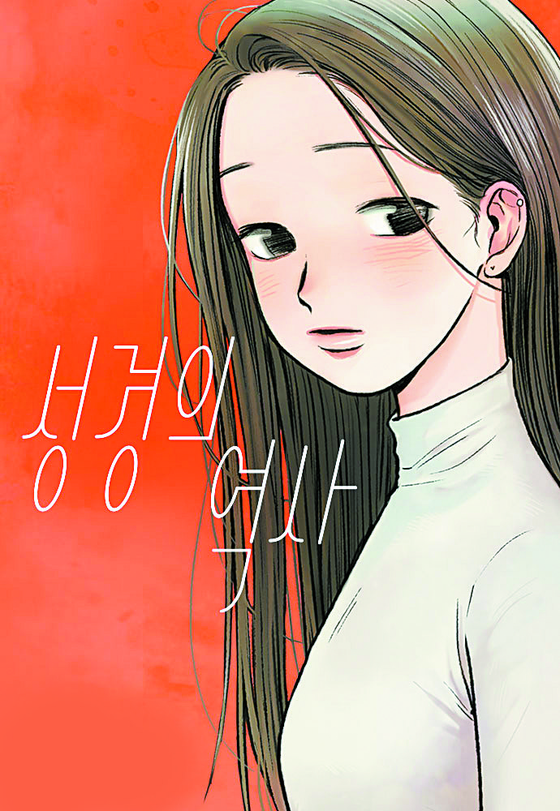 The poster for ″The History of Seong Gyeong″ [YLAB]


Earlier this year, some of Naver Webtoon’s works came under fire for misandry. Misandry can be defined as the dislike of, contempt for, or ingrained prejudice against men. A misandrist is the opposite of a misogynist.

The accusations arose because of certain expressions or gestures used by characters, but for “The History of Seong Gyeong,” the situation was different.

“The History of Seong Gyeong” deals with the real-life gender wars among the younger generations in Korea, especially on university campuses. The webtoon is unique in that it dealt with sensitive topics head on in contrast to other works that tread carefully in order not to cause controversy. Another distinctive characteristic is that the webtoon targeted both men and women, leading to fans and critics from both sexes at different times.

“The History of Seong Gyeong,” written by Choi Gyeong-min and illustrated by Youngmo, was first published in September last year and will wrap up next month. The story follows Gyeong, who is in her early twenties, and the problems she faces because of her good looks — receiving unwanted attention and threats from men as well as being victimized by women’s gossip. Most of the male characters in the story objectify Gyeong by calling “dibs” on her, and then accuse her of “gold-digging” when she rejects them. 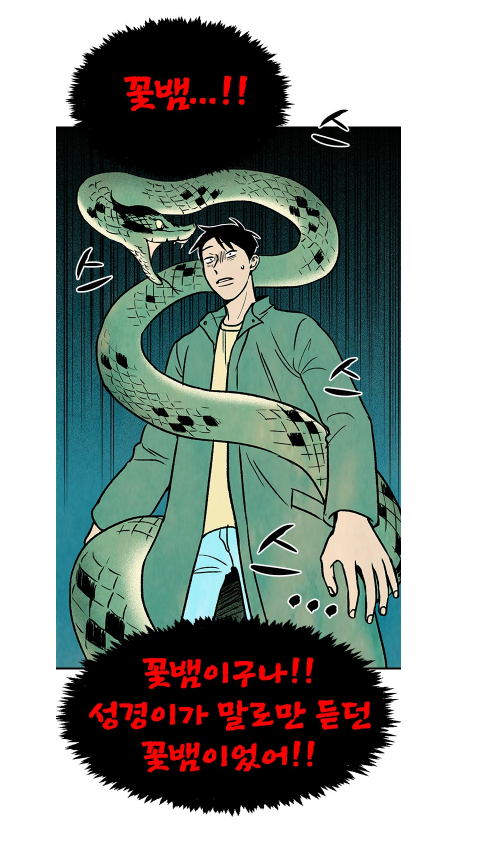 A scene from ″The History of Seong Gyeong″ shows Gyeong's former art teacher, who becomes angry because Gyeong rejects him and deems her a ″gold-digger.″ [SCREEN CAPTURE]


Gyeong is reduced to a femme fatale in the eyes of her peers. Few see her for the person she really is — a sweet, shy young woman who has a passion for animation.

In one episode, a group of Gyeong’s male classmates at university fight over who gets to give her candy on White Day. White Day is celebrated in Korea and is when men give their love interests candy. During the fight, the classmates argue over who “called dibs on Gyeong,” each claiming that she “is theirs” and that “[Gyeong] will be grateful to get candy [from them].”

“I’m a guy and I’m ashamed of how real this is,” reads one comment on this particular episode with 32,016 likes and 1,028 dislikes, while another with 25,865 likes reads “This is the reality of university life [...] Seniors rank the freshmen’s faces in order of ‘attractiveness’ by uploading their profile pictures in group chats.” Some comments even described the episode as “hyperrealistic.”

In a later episode, a group of random students talks about a female classmates’ suicide, that was supposedly caused after her boyfriend uploaded intimate photos of her online without her consent. One of the characters says “Men should die.”

This scene led to a boycott of “The History of Seong Gyeong.” The webtoon became the target of an attack of low ratings and hate comments, in particular from an online community called DC Inside, which has mostly male members. This dialogue stirred up controversy on DC Inside, and was subsequently changed to “Jerks like that should disappear.” 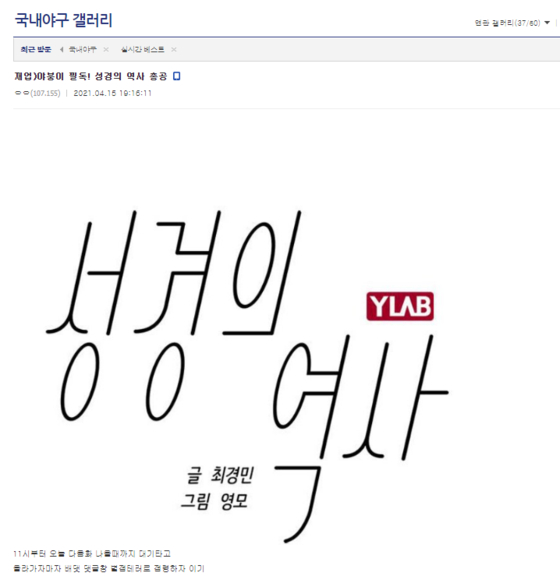 A post on the DC Inside group demands that other members attack “The History of Seong Gyeong” with low ratings and hate comments. [SCREEN CAPTURE]


These "hyperrealistic" scenarios came solely from the authors' imagination.

“No episodes are based on real-life experiences. The story stemmed from plausible situations,” author Choi told the Korea JoongAng Daily in an email interview held earlier this month.

According to Choi, “The History of Seong Gyeong” is just a story that represents the everyday lives of practically anyone.

For the illustrator Youngmo, “Seong Gyeong” also felt like a portrayal of “reality.” 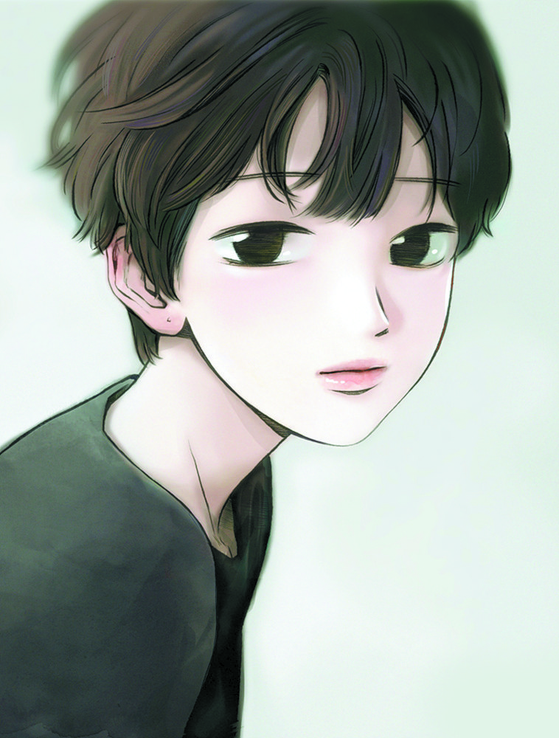 Gyeong, who is the main character of ″The History of Seong Gyeong″ [YLAB]


“The point of the story was to criticize some problematic behaviors of humans,” said Choi. On the “radical feminist” accusations, he simply replied, “I guess in a human’s point of view, anything [in the webtoon] can be subject to criticism [as everyone has different opinions].

“I wanted to portray [Gyeong] as a person everyone has encountered at least once in their life,” Choi added. “So that when people read [‘The History of Seong Gyeong’] they each will have a specific someone come to mind.”

Even though “Seong Gyeong” means the Bible in Korean, Choi said there’s no direct correlation between the two, but still remained open to all interpretation.

“The Bible is interpreted in many different ways according to who's reading it, and it's a similar situation with Gyeong," Choi said, saying that readers are entitled to different opinions and interpretations of the webtoon.

Choi was aware of the controversies that accompanied “Seong Gyeong” throughout the year, but remained firm that analysis of the story and characters is open for discussion, and that there are no definite answers.

“[A webtoon] is also a form of interaction [between the story and the readers], so misunderstandings are inevitable,” he said.

Still, many readers refuted the hate comments, saying that if Choi was actually misandrist, the story would’ve had to have all the female characters as protagonists and all male characters as antagonists. These comments especially mentioned the character of Ju Ha-na, a female classmate of Gyeong that spreads malicious and false rumors about her throughout the entire story.

“Ha-na is [also] based on one of those people many are familiar with,” explained Choi. “All the other characters were devised in the same way too.”

For Youngmo, conversing with Choi helped him to better understand each character. “It was easy to relate to [the characters] while drawing them because [Choi and I] talked about the details of their traits for every episode,” said Youngmo.

In the end, whether it's Gyeong, or her classmates like Ha-na or Nam Ju-yong, “The History of Seong Gyeong” is a story about understanding and acknowledgement. Among these characters you might see your acquaintances, your friends, your family or even yourself.

In episode 30, when Gyeong finally stands up to her former teacher who threatened her after she rejected his unwanted advances, the comment section was quickly filled with positive response. In that moment, all that mattered was that Gyeong fought back and proved that she was strong. It gave hope to the readers that Gyeong will be fine, as will everyone that can relate to her character in real life. One comment, with nearly 10,000 likes, represented the readers’ hope for the main character, and perhaps for themselves — “In the end, I wish that Gyeong will be happy.” 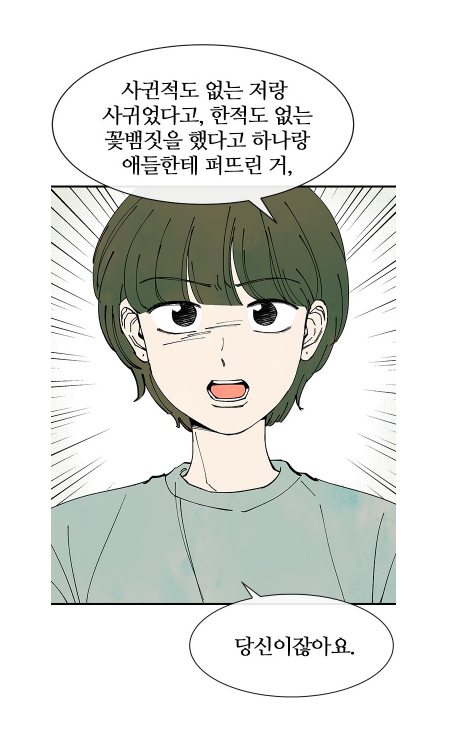 In episode 30, Gyeong finally stands up to her former art teacher and confronts him about his problematic behavior toward her. [SCREEN CAPTURE]


As “Seong Gyeong” comes to an end, Choi and Youngmo said that they will prepare for their next projects, and expressed their gratitude to the fans.

“Thank you for staying with the story until the end,” said Choi. “Your warm comments were of utmost value to me.”

“The series has ended well thanks to you all,” said Youngmo. “I hope we can meet again soon.”