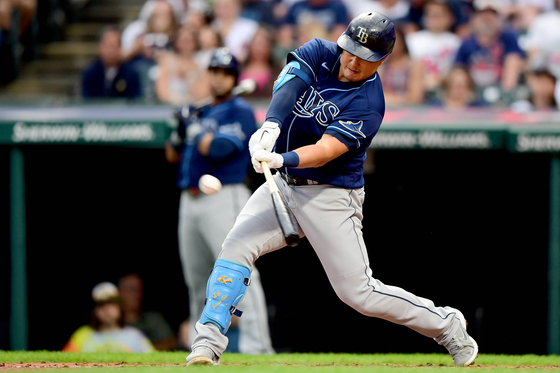 Choi Ji-man of the Tampa Bay Rays hits a double in the third inning during a game against the Cleveland Indians at Progressive Field in Cleveland, Ohio on Saturday. [AFP/YONHAP]


Choi Ji-man of the Tampa Bay Rays was on explosive form over the weekend, picking up four hits in five at-bats on Saturday before making headlines on Sunday with a full body stretch to save a wild throw.

Choi picked up three runs and three RBIs off four hits against the Cleveland Indians on Saturday at Progressive Field in Cleveland, Ohio, mixing in a solo home run in the 8-2 win.

Choi started off strong, sending the long fly out the park in the first inning of the game to give the Rays a 1-0 lead. It was his third home run in the last eight games, including a three-run dinger on Friday.

The Korean slugger picked up a double in the third inning, later coming around to score off an Austin Meadows home run, the Florida side's second of the inning.

He ground out in the fifth, before returning in the seventh for an RBI double. Choi added one more RBI with a single in the 9th then scored off another Meadows dinger.

Choi and Meadows, batting second and fourth respectively, led the offense in the big win, with six hits and seven RBIs between them including three home runs.

The win briefly put the Rays at the top of the division alongside the Boston Red Sox, although a 3-2 loss on Sunday saw them slip one game behind again.

The offense was much quieter in the second game, with Choi going three at bats without a hit. The Korean still made his presence felt, however, throwing himself into the splits to catch an errant throw from Wando Franco to save an out at first base. Choi kept the bag despite throwing himself pretty far off the base, keeping the toes of his right foot on first base even as he fell face first into the ground. 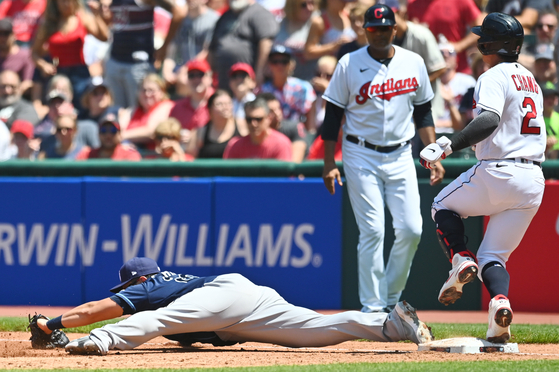 
Choi started the season late in May after spending some time out due to surgery, but he made up for it with an explosive run of form in May, picking up 10 hits and two homers in his first five games. Things quietened down a bit but he still finished the month with a .317 batting average.