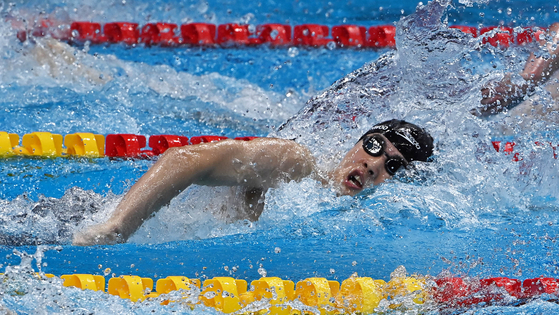 Hwang Sun-woo swims in the men's 200-meter freestyle semifinals at the Aquatics Center in Tokyo on Monday. [JOINT PRESS CORPS]

Eighteen-year-old Hwang smashed through the preliminary round on Sunday, finishing first with a time of 1:44.62 at the Aquatics Center in Tokyo. Hwang set a new Korean record with that race, beating three-time Olympic medalist Park Tae-hwan's record of 1:44.80, set at the 2010 Guangzhou Asian Games. Hwang beat that time by 0.18 seconds.

In the semifinals on Monday, Hwang finished with a slower time of 1:45.53, but still advanced to the final that will held at 10:43 a.m. on Tuesday. Hwang faces a tough race in the final, with five of the eight swimmers in the race having outpaced him in the semifinal.

Only one person, Great Britain's Duncan Scott, logged a semifinal time faster than Hwang's preliminary round, at 1:44.60, 0.02 seconds faster.

If Hwang does make the podium he will join a very short list of Korean Olympic swimming medalists, a list with only one name on it: Park Tae-hwan.

Park put Korean swimming on the map at the 2008 Games, winning gold in the men's 400-meter freestyle and silver in the 200-meter freestyle, the same race that Hwang will attempt to win on Tuesday. Park returned at London 2012, picking up two silver medals in the same two disciplines.

Hwang is now positioned to become Korea's next great swimming prodigy. He's on the way there already — in November, 2019 he beat Park's 100-meter freestyle record with a time of 48:25 at the 2020 Korea national team trials.

At the same trials, he reached new heights as he set a new junior world record at 1:45.92 in the 200-meter freestyle race. He has been swimming even faster since, having beaten his own record by a full second at 1:44:96, putting him just 0.31 seconds behind the 2016 Rio Olympics gold medal record.

Hwang's preliminary round time at the Tokyo Games would have earned him gold in Rio.