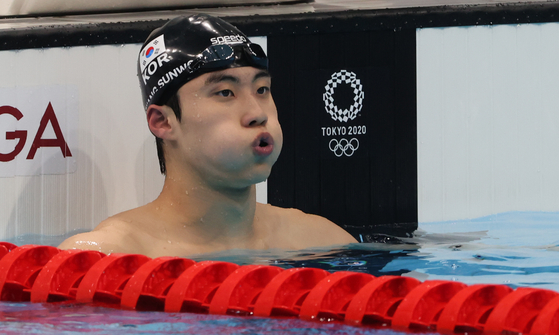 Hwang Sun-woo reacts at the end of the men's 100-meter freestyle final in Tokyo on Thursday. [JOINT PRESS CORPS]


Hwang Sun-woo finished fifth in the men's 100-meter freestyle medal race on Thursday, the first Korean ever to reach the final of the event.

Hwang finished with a time of 47.82 seconds, 0.80 seconds behind gold medalist Caleb Dressel of the United States.

Hwang's time was the second-fastest by a Korean swimmer ever recorded. It would have been a new national record, had Hwang not set a new Asian record on Wednesday with a time of 47.56 in the semifinal.

Although Hwang has so far missed out on a medal in both the 100-meter and 200-meter freestyle races, he has still made huge strides for Korean swimming at the Games.

Korea has never been a swimming powerhouse — every single medal the country has ever won in the sport, one gold and three silver, were won by Park Tae-hwan, whose records Hwang has repeatedly bested over the last few days.

Hwang still has one event left, but it might be the most challenging yet. Hwang will compete in the men's 50-meter freestyle preliminary heats at 7 p.m. on Friday.