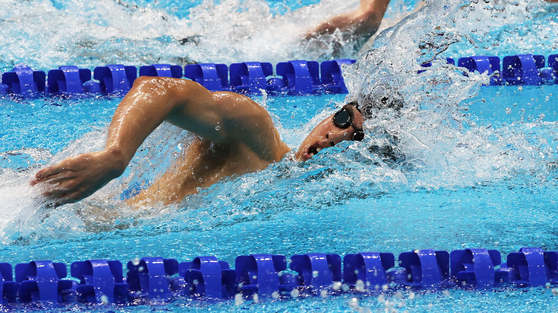 Hwang finished second in the seventh heat on Tuesday evening with a time of 47.97 seconds, beating his own record of 48.04 seconds set in May at the Korean Olympic trials. Hwang finished 0.08 seconds behind Kliment Kolesnikov of the Russian Olympic Committee.

Hwang on Sunday set a new Korean record in the men's 200-meter freestyle with a time of 1:44.62. Swimming star and three-time Olympic medalist Park Tae-hwan set the previous Korean record of 1:44.80 at the 2010 Guangzhou Asian Games. Hwang beat that time by 0.18 seconds.

Park put Korean swimming on the map at the 2008 Games, winning gold in the men's 400-meter freestyle and silver in the 200-meter freestyle. Park returned at London 2012, picking up two silver medals in the same two disciplines.

Before Hwang came along, Park was also the Korean record holder in the men's 100-meter freestyle as well.