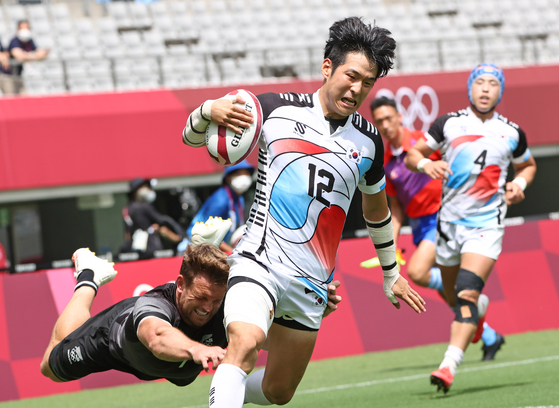 Jeong Yeon-sik scores a try for Korea in a Group A rugby sevens match against New Zealand at the 2020 Tokyo Olympics in Tokyo. [YONHAP]


The Korean men's rugby sevens team lost their first match at the 2020 Tokyo Games 50-5 to New Zealand on Monday, scoring a surprise early try to leave the field with something to be proud of in their Olympic debut.

The David and Goliath matchup was always going to go New Zealand's way, with Korea entering the game as plucky underdogs with nothing to lose. New Zealand is one of, if not the, greatest rugby playing country in the world, while Korea has just qualified for its first ever Games, and really its first ever major international tournament.

That Korea managed to score a try is something of a surprise — at a pre-Olympic tournament last month, Korea dropped two games to Argentina without getting a single point on the board.

And what a try it was, with Jeong Yeon-sik breaking free down the right flank, jumping just out of reach of a New Zealand player and outpacing the squad, even managing to circle back around close to the posts.


At the end of the first half Korea still had a foot in the game, with the score at 14-5. Things got out of hand in the second half, with two sin bin trips providing New Zealand plenty of room to pile on, quickly taking the score up to 50-5.