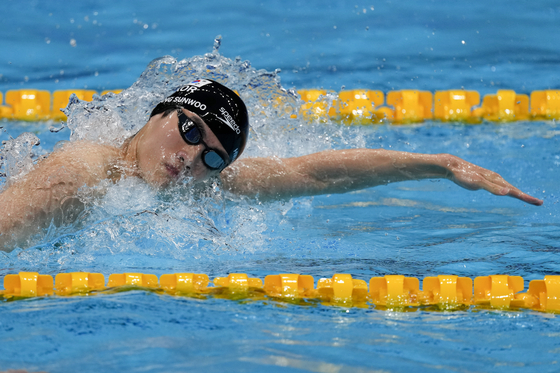 Hwang Sun-woo swims in a heat during the men's 200-meter freestyle at the 2020 Summer Olympics on July 25 in Tokyo, Japan. [AP/YONHAP]


Korea may not have won any medals in the pool at the 2020 Tokyo Olympics, but the swimming team leaves the Games having shattered a number of national records with plenty of potential for more success in the future.

Korea's success at the Games — and it was a success, even if it didn't lead to any silverware — was led by 18-year-old freestyle swimmer Hwang Sun-woo.

Over the course of the last week, Hwang shattered two Korean records and an Asian record, becoming the first Korean swimmer since Park Tae-hwan to reach a final at the Games. While he would undoubtedly have liked to have medaled, Hwang's performance at the Olympics proved that a Korean swimmer can stand alongside the European and American athletes that dominate the sport.

Korea has never been a swimming powerhouse — every single medal the country has ever won in the sport, one gold and three silver, was won by Park, whose records Hwang has repeatedly bested over the last few days.

Few athletes dominate a sport quite as much as Park, whose name is synonymous with swimming in Korea. But being as good as Park is no longer enough — swimmers around the world are getting faster and Korean athletes face a serious challenge keeping up. 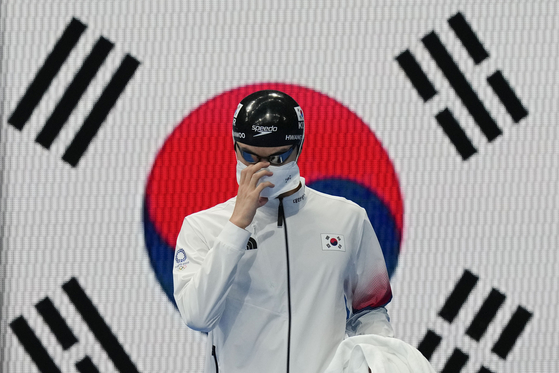 Hwang Sun-woo arrives for a men's 100-meter freestyle semifinal at the 2020 Summer Olympics on July 28 in Tokyo, Japan. [AP/YONHAP]


But Hwang is getting faster too. Back at the 2008 Beijing Olympics, Park won silver in the men's 200-meter freestyle with a time of 1:44.85. Hwang broke that record in Tokyo with a new Korean record of 1:44.62 — that would have taken silver in Beijing. Hwang swam the 100-meter freestyle in the semifinal in Tokyo in a time of 47.56, which would have won him bronze in Beijing or London 2012. Had he swam that fast in the final in Tokyo, he wouldn't have medaled.

Hwang finished fifth in the 100-meter freestyle final, the best finish by an Asian swimmer since 1952. In doing so, Hwang smashed through the stereotype that Asian swimmers aren't able to compete in sprint swimming races against bigger, stronger athletes.

Even Park was said to have a physical advantage that allowed him to compete on the world stage — his lung capacity was reportedly around 7,000cc, about twice the average — but Hwang is, on paper, entirely normal. What gives Hwang the edge is hard work and skill, something that any young Korean athlete can aspire to. He also has incredibly fast reaction times, outpacing even five-time gold medalist Caeleb Dressel of the United States when it comes to reaction time.

Hwang isn't the only swimmer to break a record in Tokyo. Korea's Lee Ju-ho also set a new national record in the men's 200-meter backstroke, with a time of 1:56.77. Lee failed to make it past the semifinals, but his success in the sport is still a good sign as Korea has never had a seriously competitive backstroke swimmer.


Lee, 26, may not have that many years left competing at the top level, but Hwang is only just getting started. With more interest and more training in the future, Korean swimmers, led by Hwang, could still become a competitive force on the world stage.