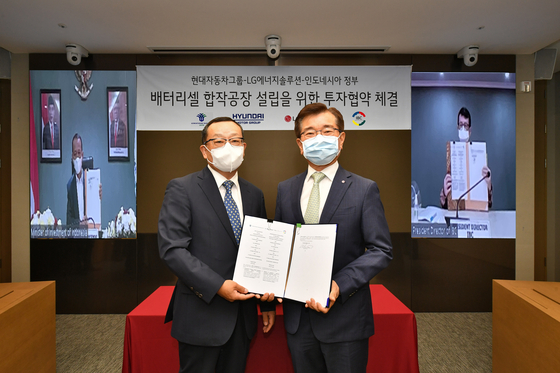 Cho Sung-hwan, CEO of Hyundai Mobis, left, and Kim Jong-hyun, CEO of LG Energy Solution, pose for a photo after signing a memorandum of understanding in Seoul on Thursday. Bahlil Lahadalia, left in the back, Investment Minister of Indonesia, and Toto Nugroho, right in the back, CEO of Indonesia Battery Corporation joined the event virtually. [HYUNDAI MOTOR]

The automaker and battery maker will establish a 50-50 joint venture to build a factory in Karawang Regency, Indonesia, 65 kilometers southeast of the capital of Jakarta. It will have an annual production capacity of 10 gigawatt-hour (GWh) or enough for approximately 150,000 EVs.

The Korean companies and the Indonesian government signed a memorandum of understanding on Thursday.

The joint venture will be started in the next few months and ground will be broken on the factory by the end of the year.

It will occupy a 330,000-square-meter plot of land and be completed by the end of 2023. Production will begin in the first half of 2024, according to the companies.

The factory will make NCMA lithium-ion cells, which use nickel, cobalt, manganese and aluminum.

"All the battery cells made at the new facilities will be used for Hyundai Motor Group's EV models that will be produced from 2024," said the automaker's spokesman on Thursday.

A Hyundai Motor automobile factory is currently under construction nearby.

In 2019, Hyundai Motor inked a $1.55 billion deal with the local government to build a car factory in Bekasi in West Java. Construction is supposed to be completed this year. The factory, in which Hyundai Motor plans to make small SUVs and EVs, is supposed to start full-scale production next year.

"The joint factory will help Hyundai Motor and Kia make better EVs in terms of efficiency, performance and safety by being supplied with more customized battery cells from LG Energy Solution," Hyundai Motor said in a release Thursday.

Indonesia, which for the past decade has sold an average of 1 million cars per year, has been trying to switch to EVs. Under an ambitious goal of selling only EVs from 2050, its government has been attracting EV-related investment by offering generous incentives.

"The Indonesian government promised various incentives and tax benefits including exemption from corporate tax and tariffs on equipment and parts for a certain period of time as part of its plan to expand Indonesia's EV market," Hyundai Motor said. "It will greatly contribute to the price competitiveness of our EV models."

“This investment cooperation project is projected to make Indonesia move up from a producer and exporter of raw materials to become an important player in the world's supply chain for the electric vehicle battery industry,” Indonesia's Investment Minister Bahlil Lahadalia was quoted as saying on CNBC Indonesia in May when news of the joint venture was first reported in the media.