In girl group aespa’s music video for “Black Mamba” (2020), a giant serpent named Black Mamba is the villain that the group’s members must fight against. [SCREEN CAPTURE]


Ever since girl group aespa’s latest song “Next Level” topped major Korean music charts in June, the “Kwangya” universe that the song constantly refers to has been drawing attention from K-pop fans.

“Next Level” dropped in May and was initially criticized for its convoluted lyrics. The song starts with: “I'm on the next level […] Unity is my weapon; I walk to Kwangya; I know your home ground; Confront the threat.”

The song slowly climbed the charts thanks to its catchy melody, but many still find its lyrics cryptic.

The recurring mention of Kwangya has stood out to K-pop fans, but “Next Level” took things to just that — the next level. While NCT U, Exo and NCT Dream incorporated the term in a more general context, the lyrics of “Next Level” talk exclusively about SMCU concepts, resulting in lyrics that are barely comprehensible without prior knowledge of the fictional universe.

Twenty-three-year-old Hong Seul-bean became intrigued by “Next Level” and shared her thoughts on its lyrics.

“Although ‘Next Level’ was such an earworm that I memorized all the lyrics, I still have no idea what the song is about,” she said. “Why are they walking to Kwangya and why do they keep mentioning that word?” 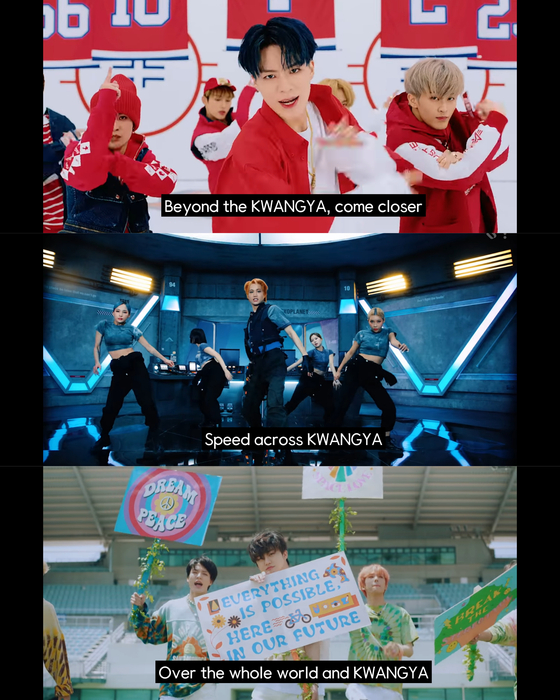 
So what is Kwangya? The term was first introduced in September of last year in boy band NCT’s teaser video titled “NCT 2020: The Past & Future – Ether.”

The video abstractly defines Kwangya as a “wave” that “keeps expanding limitlessly […] beyond the infinite universe” and has no form, rules or limit. “It is also a limitless medium and can connect dimension to dimension, people within people.”

Another video released in May titled “aespa 'ep1. Black Mamba' - SM Culture Universe” is wholly dedicated to explaining the SMCU’s key concepts. According to SM Entertainment’s official definitions, "ae" is one’s alter ego in the virtual world with a free will of its own. aespa’s ae have appeared in the group’s music videos in the form of computer-generated avatars.

aespa's "ae," or alter egos in the virtual world, have appeared in the group's music videos in the form of computer-generated avatars. [SCREEN CAPTURE]


The SMCU consists of multiple dimensions: the real world, FLAT inhabited by ae, Kwangya beyond FLAT, and Kosmo — a transcendent space that no one has reached before. An energy called P.O.S (Port of Soul) can connect the real world and FLAT.

People in the real world can either be oblivious of their ae or be aware of it and communicate with them; a process dubbed SYNK. Naevis is a mysterious being that helps humans connect with their ae. When SYNK reaches its peak, ae can Rekall, or enter the real world.

The villain of the SMCU is Black Mamba, which obstructs humans from connecting with their ae, causing a Synkout. Black Mamba is depicted as a giant serpent in aespa’s music video for “Black Mamba,” while the song explains that aespa members must fight against it. 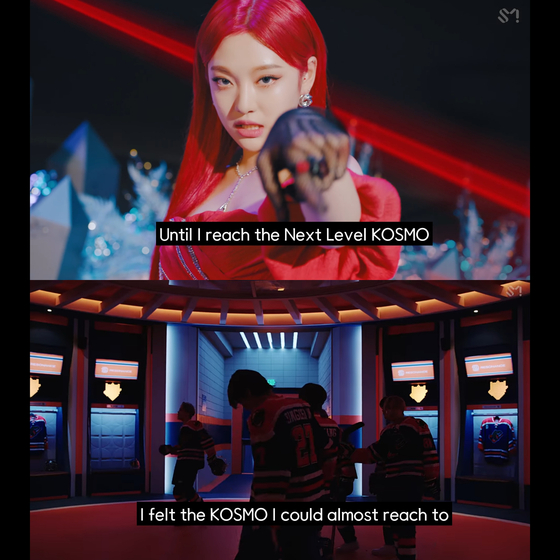 Kosmo — a transcendent space that no one has reached before — is mentioned in aespa’s “Next Level,” top, and NCT U’s “90’s Love,” above. [SCREEN CAPTURE]

The SMCU aims to connect every SM artist under one coherent storyline, similarly to the Marvel Cinematic Universe. For instance, NCT U’s music video for “Make A Wish (Birthday Song)” (2020) ends showing a butterfly fluttering through a subway car overgrown with flowers, a scene which reappears in the “Black Mamba” music video released by aespa a month later. 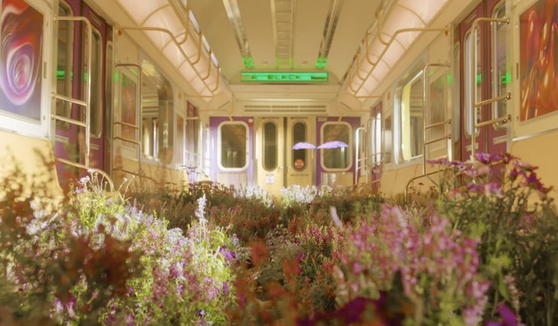 NCT U’s music video for “Make A Wish (Birthday Song)” (2020) ends showing a butterfly fluttering through a subway car overgrown with flowers, a scene which reappears in the “Black Mamba” music video released by aespa a month later. [SCREEN CAPTURE]


This is not SM’s first attempt to create an elaborate fictional universe. In 2012, it debuted 12-member boy band Exo with the backstory that each member had a superpower to fight against evil. But Exo’s debut album was relatively unsuccessful, and the universe was scrapped entirely after some members left the band. Nonetheless, the “good versus evil” world view has returned with the SMCU’s aespa and Black Mamba.

Although Exo’s early lyrics were based on its universe, they still mostly told conventional stories that the general public could easily understand. In contrast, comprehending aespa’s lyrics requires ample background knowledge on the SMCU.

In 2012, SM Entertainment debuted 12-member boy band Exo with the backstory that each member had a superpower to fight against evil. [SCREEN CAPTURE]


But pop culture critic Kim Heon-sik says this type of convolution is actually an effective strategy to attract fans in the long run.

“When lyrics and music videos are abstruse, curious fans will naturally gather online to discuss hidden meanings together,” said Kim. “That creates a bond among fans and forms a strong fandom.”

Indeed, aspects of the SMCU that are yet to be clarified have sparked enthusiastic debates in comment sections and fan communities.

Fictional universes have been a trend in the K-pop scene in recent years; boy band BTS has its BTS Universe, and rookie boy band Kingdom’s universe is based on historical and legendary kings.

However, the SMCU is bound to be more vast and intricate due to the large number of artists under the agency, including NCT, Exo, SHINee, Red Velvet, BoA, TVXQ, Girls’ Generation, Super Junior and more.

This expansive member base is not the only factor that makes the SMCU unique. Chammah J. Kaunda, a professor of theology at Yonsei University, believes SM’s universes have been strongly alluding to Christianity.

“Although it’s open to interpretation, the ‘good against evil’ consistently seen in Exo and aespa’s world view is very messianic,” Kaunda told the Korea JoongAng Daily. “Exo debuting as 12 members was also no coincidence in my view, considering the Twelve Apostles.”

Kaunda says biblical references are even more glaring in aespa’s songs and the SMCU.

“The term Kwangya itself has a Christian connotation,” he said. “The ‘Temptation of Christ,’ when Satan tries to tempt Jesus, is called ‘Temptation in the Wilderness [Kwangya]’ in Korean.”

Temptation is a recurring word in aespa’s songs, and “Black Mamba” sings about the serpent being “the temptation that swallows you.”

“A literal serpent is the villain that symbolizes temptation [in the SMCU],” said Kaunda. “And a line in ‘Next Level’ goes, ‘Don’t covet things of Kwangya.’ I see a deliberate correlation with the biblical story of a serpent tempting Eve to covet and eat the forbidden fruit.”


However, both Kaunda and Kim say that the SMCU’s possible references to Christianity are most likely not for religious purposes, but for storytelling.

“I find it surprising and fascinating that biblical elements have been condensed in K-pop songs,” Kaunda said. “But the Bible is bigger than Christianity, since its stories are well known to non-Christians too.”

“The main point is not religion, but storytelling,” said Kim. “Biblical stories are especially familiar to audiences in the West and South America where Christianity is more mainstream. SM may have borrowed biblical elements for the SMCU’s storyline to appeal to international fans.

“These references and backstories may be confusing at first,” Kim added. “But to decode cryptic content, fans have to rewatch previous content, boosting views for past music videos and such. And whenever they decipher something, they feel like they’re true fans because they’ve understood the convoluted universe. That’s how you get a loyal fandom.”