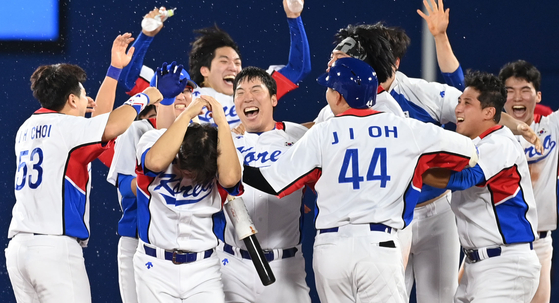 The Korean baseball team celebrates after beating the Dominican Republic in the first round of the knockout stage at the 2020 Tokyo Olympics at Yokohama Stadium in Yokohama, Japan. [JOINT PRESS CORPS]


The Korean baseball team pulled off a remarkable last-gasp victory against the Dominican Republic at the 2020 Tokyo Olympics on Sunday, scoring three runs in the ninth inning to progress straight to the second round of the knockout tournament.

The Dominican Republic, who held their own against Korea for eight innings, are not immediately knocked out, but instead head to a repechage game for another chance to remain in the tournament.

The Caribbean side was first on the scoreboard, stringing together a couple of hits to start the first inning. With no outs and runners on first and third, Korea decided give the Dominican Republic a helping hand, bringing home the first run with a wild pitch.

Korea rallied quickly, stringing together a single, a double and a walk to load the bases before catcher Yang Eui-ji blasted a sacrifice fly to left field to tie the game up at 1-1.

Neither team was able to get anything across in the second or third inning, but in the fourth inning it was the Dominican Republic's time to shine. Two hits — a single and a home run — was all it took to put the Caribbean side up 3-1, a lead that seemed insurmountable for more than an hour.

Korea apparently had no reply. Despite getting a runner on base in every inning, the very best that the KBO has to offer couldn't convert, repeatedly stranding players and doing nothing to chip away at the 3-1.

In fact, Korea nearly threw the whole thing away at the top of the ninth. Closer Oh Jae-il attempted to pick off a runner at first, but first baseman Oh Jae-il missed the catch, allowing the ball to roll into foul territory and the runner to advance all the way to third.

That runner never got any further, but the embarrassing play was indicative of the clumsy mistakes that have plagued the team throughout the tournament.

Yet despite the obvious issues, Korea did come through, overcoming a 3-1 deficit at the bottom of the ninth inning to take a sudden victory.

The inning started with a single from Choi Joo-hwan, with pinch runner Kim Hye-seong quickly stealing second to get  into scoring position. Park Hae-min was up next, hitting a single to left that brought Kim Hye-seong home, taking the score to 3-2.

Park advanced on the first out, with Lee Jung-hoo then driving a double to left field to bring home Park and tie the score at 3-3. Yang grounded out, leaving Korea with a runner on second and two outs in a tied ball game at the bottom of ninth.

Up next, fittingly, was Kim Hyun-soo, one of the only true veterans on the squad and one of just three players to have also appeared at the 2008 Beijing Olympics when Korea won gold. Kim, proved exactly why he's one of the few true reigning champions on the team, hitting a clutch single to right field to bring Lee home and win the game, 4-3.

With the win, Korea now advance to the second round of the knockout stage where they take on Israel, who beat Mexico 12-5 in a third-place playoff earlier on Sunday. The two sides faced off earlier in the competition, with Korea winning 6-5 after a hit-by-pitch brought the winning runner home.

Korea and Israel will play each other on Monday at midday. The winner of that game will go on to face either Japan or the United States in the semifinal, while the loser faces the Dominican Republic in the repechage game.