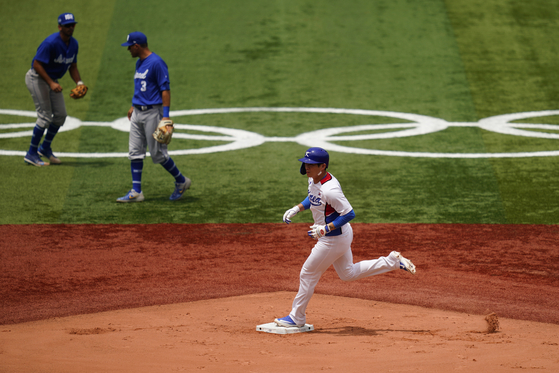 Korea's Oh Ji-hwan rounds the bases after hitting a two-run home run during a baseball game against Israel at Yokohama Baseball Stadium during the 2020 Summer Olympics on Monday. [AP/YONHAP]


After a week of overwhelmingly underwhelming baseball, the Korean national team finally started to look like the defending champion it's supposed to be, beating Israel in an 11-1 rout on Monday.

With the win, Korea earned a spot in the semifinals, where they will face the winner of a game between Japan and the United States due to be played on Monday evening as of press time.

Israel and Korea have faced off once before in the contest, a humiliating matchup on July 29 that saw the defending champions very nearly lose their opening game. Korea did scrape out a win, but it was more thanks to Israel's mistakes than anything intentional. Korea went on to lose a game to the United States before pulling off a last-gasp ninth inning win against the Dominican Republic on Sunday after struggling for most of the game.

The Korean side that had fumbled its way through those three games was nowhere to be seen on Monday. Instead, Korea was consistently strong on offense, spreading out the first few runs before exploding in the fifth to take an insurmountable lead. Pitching also looked tighter, with only one hiccup causing any real damage.

Korea started off stringing together a couple of singles in the first, with a sacrifice fly giving the team an early lead. Israel had no answer and Korea continued to pile on, hitting a single to kick off the second with a two run home from Oh Ji-hwan quickly taking the score up to 3-0.

With a comfortable cushion in place, Korea sat back a bit for the next few innings, before getting a jolt in the fifth when three walks and a hit-by-pitch combined to bring an Israeli runner home.

Perhaps not feeling as safe with the 3-1 lead, Korea went on the offensive. Two singles and a hit-by-pitch loaded the bases with no outs, and Korea was able to bring homer a runner when a throw to home plate went wild, allowing Kim Hye-seong to steal third.

With the bases still loaded, Park Hae-min hit a double to left field, bringing home runners from second and third. Kang Baek-ho was up next, lacing a single into left field that also brought home two runs.

With five runs already in the bag, Kang was run out at second base to leave one runner on the base as Kim Hyun-soo stepped up the plate. Kim, who has been incredibly clutch throughout the series, laced a two-run home run to right field, taking the total for the inning to seven.

Korea added one more in the seventh inning, taking a 10 run lead and effectively ending the game — under Olympic rules, a game is stopped after seven innings if a team is losing by 10 runs.

With the win, Korea earned a ticket straight to the semifinals, where they will take on either the United States or Japan at 7 p.m. on Wednesday. Israel head back to round one, where they take on the Dominican Republic in a repechage game.