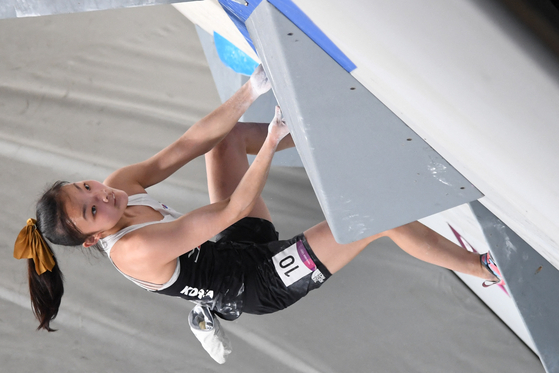 
Korea's Seo Chae-hyun finished second in the women's sport climbing qualifications on Wednesday evening, advancing to the final and setting Korea up as a very strong medal contender in the Olympics' newest sport.

Sport climbing makes its Olympic debut at the Tokyo Games, making Seo Korea's very first sport climbing Olympian, alongside teammate Chon Jong-won. But while Chon failed to advance beyond the qualifiers in the men's competition, Seo has already established herself as one of the top climbers at the Games.

Sport climbing is made up of three distinct disciplines — speed, bouldering and lead — but at the Olympics, it is competed as a single event with one medal available for each gender. Speed, in particular, has emerged as a contentious inclusion. In the event, athletes compete to climb an identical 15-meter (50-foot) wall set at an angle of 95 degrees faster than their opponents. As the other two events are based on difficulty, the skillset is distinctly different, and climbers who are strong in one often lag behind in the others. Aleksandra Miroslaw of Poland topped the speed scoreboard, but finished last in bouldering and second from last in lead.

That was also the case for Seo, who finished 17th in speed, but fifth in bouldering and first in lead to take second place overall.

In lead, athletes have to climb as high as they can with a score calculated on the number of holds they reach. The event, which is more a marathon to speed's sprint, prioritizes endurance and focus. Seo reached 40 holds, outscoring the second-place finisher by a huge seven holds for a dominant first place.

Seo's lead was so impressive that she reached the 37th hold with a good two minutes left on the clock. As she climbed higher, coaches and climbers from around the world started cheering her on. Seo eventually tapped out at the 41st hold, 15 meters above the ground.

Before the Olympics began, there were some expectations that sport climbing could be dominated by athletes from places with a strong background in extreme sports and climbing, like the United States and some European countries. Seo has very quickly proven that Korea can be a major contender, and she likely isn't an outlier — Kim Ja-in, who commentated on Seo's climb for KBS on Wednesday, has been world No. 1 multiple times in her career.


Seo advances to the final as one of the top eight climbers and a clear favorite for a spot on the podium. Seventeen-year-old Seo will be climbing for her first ever medal at 5:30 p.m. on Friday.