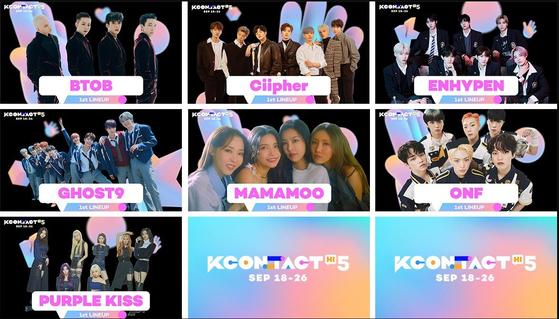 
Prior to the kick-off of the fifth edition of KCON:TACT, an online K-culture festival by CJ ENM, the entertainment giant announced the first lineup of artists on Wednesday.

K-pop acts in the lineup include BTOB, Mamamoo, Enhyphen, ONF, Ghost9, Ciipher, and Purple Kiss. The fifth edition of the event, dubbed KCON: TACT HI 5, will be available from Sept. 18 to 26 on CJ’s video platform Tving and can also be watched at CGV theaters across the country. Overseas fans can participate through the KCON Official and Mnet K-pop channels on YouTube, and Japanese audiences can watch through Ticketpia.

CJ ENM’s K-pop festival KCON had been staged at 24 different cities since it was launched in 2012 but with the Covid-19 pandemic, the festival was moved online and renamed KCON:TACT.