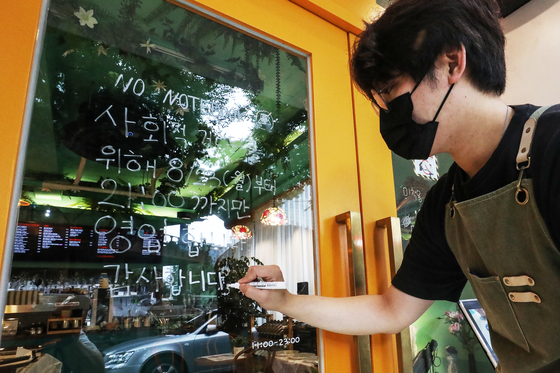 An employee at a coffee shop in Seoul writes a notice on Sunday explaining new social distancing rules to take effect the following day, which would limit business hours of restaurants and cafes in areas under Level 4 to 9 p.m. from the current 10 p.m. [NEWS1]


After many twists and turns, seven million doses of Moderna’s Covid-19 vaccine will arrive in the next two weeks, the government said Sunday — still less than the amount originally planned for August.

"Moderna has informed us that it will provide around 7.01 million vaccine doses to Korea by [Sept. 5],” Second Vice Health Minister Kang Do-tae said during a briefing Sunday.

On Dec. 31, 2020, Korea inked a deal with Moderna for 40 million doses — enough for 20 million people — and about 8.31 million doses will arrive by early September, health authorities said.

After two delays to a shipment of Moderna vaccines due in late July, the U.S. pharmaceutical company informed Korea that it would deliver fewer than half the 8.5 million doses planned for August due to a problem in its vaccine production lab.

For the third quarter, Moderna was supposed to be the main supplier of vaccines to Korea along with Pfizer.

A government delegation of four high ranking officials led by Second Vice Health Minister Kang Do-tae held a meeting with Moderna representatives in the U.S. on Aug. 13, and asked the company to deliver the delayed vaccines by early September at the latest.

“The [newly announced] amount has increased significantly from the volume of 'less than half' notified on Aug. 6,” Kang said.

Kang added, “We have procured enough doses to give one shot to 36 million people by the Chuseok holidays.”

After Moderna delayed its shipments, the government said it was looking for supplies through vaccine swaps deals and taking donations from other countries.

The vaccines from Romania were reported to be donated as Romania’s own vaccination campaign has been advancing at a very slow pace over the summer, the news agency said, and the vaccines were at risk of expiring.

After the news report became known, some lawmakers from opposition parties criticized the government for “begging” for vaccines.

In response, Korea’s Foreign Ministry denied the report that the vaccines will be provided for free, and said discussions are underway between the two nations for a possible vaccine swap.

“Reports about the Romanian government donating vaccines for free are not true,” the ministry said in a text message to reporters Saturday night, adding, “Discussions are under way between Korea and Romania in the context of a vaccine swap.”

According to the Foreign Ministry, Korea is in the final stage of vaccine swap talks with Romania, with Korea receiving vaccines from the European country and donating medical devices and goods of equal value.

“The government has built trust between the two countries by supporting the Romanian government with diagnosis kits and other quarantine equipment in March 2020 during the early months of the coronavirus outbreak," it said.

Romania's state-run news agency said the donated vaccines are nearing their expiry date, yet health official Kang said the expiration date is not until November or afterward.

Korea has pursued vaccine cooperation and exchanges with countries such as the U.S. and Israel.

The U.S. donated over 1.4 million doses of the Johnson & Johnson’s Janssen vaccine, which was used to inoculate Korea's reserve forces. Korea also received 782,000 doses of the Pfizer vaccine from Israel in a swap and it will give back the same amount in coming months.

Meanwhile, the current social distancing rules will be extended with some changes for another two weeks through Sept. 5.

The strictest Level 4 restrictions are applied in the greater Seoul area and other cities where infections are running high, while other regions have adopted the second-highest Level 3 measures.

Starting Monday, the curfew on restaurants and cafes in areas under Level 4 will be tightened to 9 p.m. instead of 10 p.m., and only take-out and delivery orders will be allowed after that. Eating inside convenience stores after 9 p.m. will also banned.

Another change will allow up to two fully vaccinated people — or those who received their final dose of vaccination 14 days prior — to join a group of two other people after 6 p.m., although the rule only applies to restaurants and cafes.

However, vaccinated people overseas won’t be eligible for such vaccine incentives, as Korea has yet to find a system that can acknowledge or check the authenticity of vaccinations overseas, health authorities said.

In addition, the government ordered all workers at facilities with high risk of coronavirus infections in areas under Level 4, such as noraebang, hagwon, indoor sports facilities, bathhouses, department stores and large stores, to be subject to regular preemptive tests every two weeks, including fully-vaccinated people.

Virus cases in Korea have showed no signs of abating despite stricter antivirus measures across the country for more than a month. 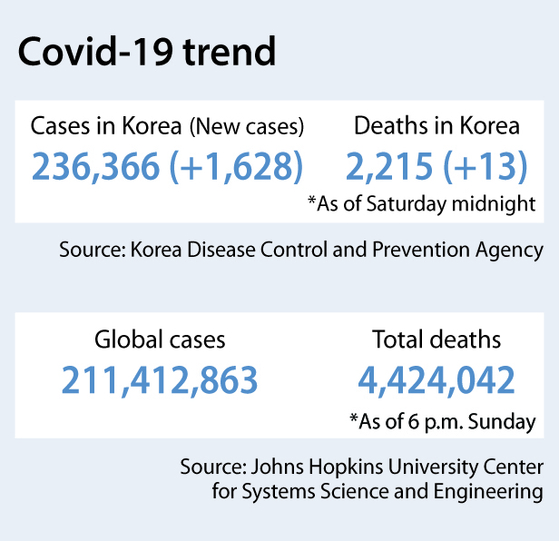 As of Saturday midnight, more than half of the country’s population at around 50.4 percent have received one dose of a Covid-19 vaccine, while around 22.5 percent have been fully vaccinated.