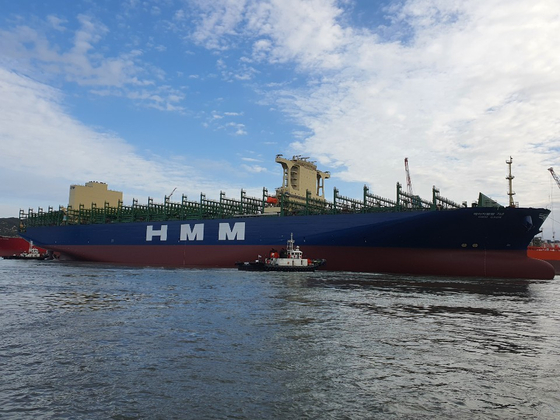 HMM ship is guided into port in Ulsan on March 22. [YONHAP]


One of HMM’s labor unions did not reach an agreement with management on wages Thursday, giving the union the right to go on strike.

After three rounds of labor-management negotiations mediated by the National Labor Relations Commission (NLRC), labor and management failed to agree on wages for this year.

The union can now strike.

The union, representing employees working on land, is asking for a 25 percent raise for workers, while management is offering eight percent.

The management of HMM, the largest shipping company in Korea, initially proposed a 5.5 percent increase but raised the rate on Tuesday.

Almost all members of the union took part in the vote on wages, and 95 percent of them disagreed with management’s proposal.

The union argues that a 25 percent raise is necessary after wages were frozen 2012 through 2019 and as the earnings of the company have improved.

The HMM labor union for crews on ships is holding the second round of negotiations today.

The negotiation can be extended to a third round under the agreement.

If HMM accepts the union proposal for a 25 percent wage increase and a 1,200-percent-of-wage bonus, it could cost 120 billion won ($103 million), around 1 percent of the company’s estimated sales in 2021, “which does not greatly affect corporate value,” said to Nah Min-sik, an analyst at eBest Investment & Securities.

HMM is 24.96 percent owned by Korea Development Bank, its creditor.