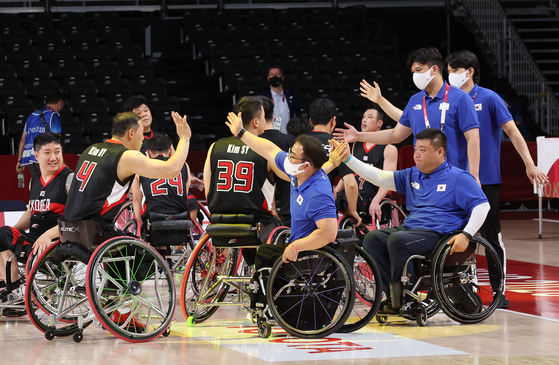 Members of the Korean wheelchair basketball team are consoled by team staff after their defeat against Spain on Wednesday evening. [REUTERS/YONHAP]


The Korean wheelchair basketball team were bested by Turkey 80-70 at the 2020 Tokyo Paralympics at Musashino Forest Sport Plaza on Thursday evening.

Korea put up a good fight against a legitimate powerhouse. Turkey placed fourth at the 2016 Rio Paralympics, then won gold and bronze at the 2017 and 2019 European Championships, respectively. Korea, on the other hand, is making its first Paralympics appearance since Sydney 2000.

The first quarter ended 21-15 in favor of Turkey. Gim Dong-hyeon got off to a strong start by scoring eight points plus an assist, but Turkey's 40-year-old captain Ozgur Gurbulak did even better by scoring 10 points and making three assists.

Korea came out with a vengeance in the second quarter, ramping up their offensive efforts and in general looking far more energetic on the court. Gim continued to set an example, and captain Cho Seung-hyun found his tempo as well, doing well throughout and eventually tying it 33-33 with two and a half minutes left. Turkey ended up retaking the lead 38-33 by the quarter's end, but Korea's newfound momentum could still be felt.

Things remained tense early on in the third quarter with Korea continuing to press the attack and posing a real threat, but Turkey rallied in the latter half and ultimately extended their lead to 57-48.

Going into the fourth quarter, Turkey seemed to enjoy a clear advantage in stamina and looked to be on course to comfortably close out the game. A last-ditch rally from Korea did manage to bridge the gap to 69-66 with three minutes left on the clock, but Turkey soon recovered and the final score stood at 80-70.

Korea is in Group A, alongside Spain, Canada, Colombia, Japan and Turkey. The team's next match is against Japan, at 8:30 p.m. on Friday.