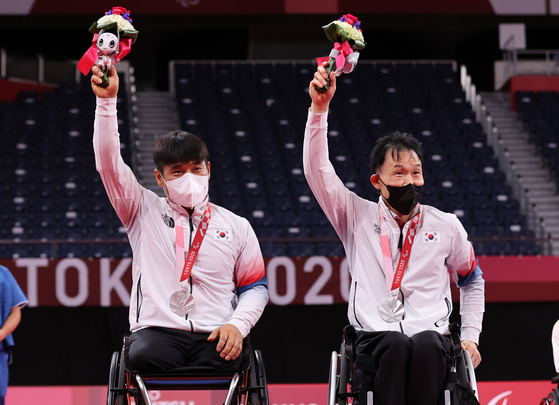 Kim Jung-jun and Lee Dong-seop pose after winning silver in the men's doubles WH badminton tournament at the 2020 Paralympics in Tokyo on Sunday. [YONHAP]


Korea picked up two more medals in men's badminton at the 2020 Tokyo Paralympics on Sunday, winning silver in both the men's singles class WH2 and the men's doubles class WH.

Kim Jung-jun was up first, losing the men's WH2 gold medal match to Daika Kajiwara of Japan in straight sets. The victory was a big win for Kajiwara, who entered the tournament ranked at No. 6 in the world to Kim Jung-jun's No. 1.

World No. 5 Kim Kyung-hoon went on to lose his bronze medal match to world No. 2 Chan Hoyuen of China.

Kim Jung-jun was back on the court a few hours later, alongside Lee Dong-seop for the men's doubles WH gold medal match. The duo lost to Mai Jianpeng and Qu Zimo of China to claim the silver medal.

Lee Sam-seop also took silver in men's class WH1 on Saturday, leaving Korea with a total of four medals at the 2020 Tokyo Paralympics.

Sunday's badminton medals mark the end of the 2020 Paralympics for Korea. Across all sports, Korea won two gold, 10 silver and 12 bronze medals.