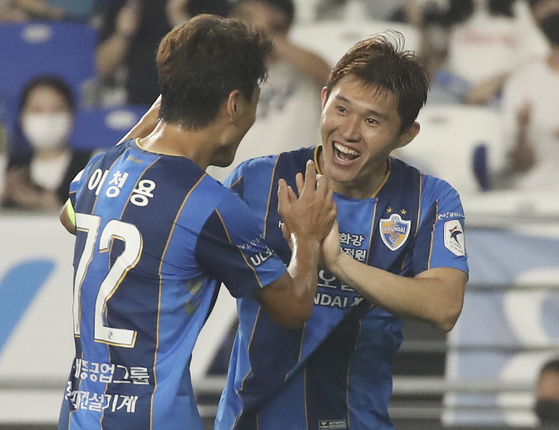 Lee Dong-gyeong of Ulsan Hyundai celebrates with teammate Lee Chung-young after scoring his second goal of the match against Incheon United on Sunday at the Ulsan Munsu Football Stadium in Ulsan. [NEWS1]


Ulsan Hyundai continued to hold onto the top spot in the K League 1 after defeating Incheon United on Sunday, while Jeonbuk Hyundai Motors' pursuit of the title took another blow as they drew with Suwon FC for one point.

On Saturday, Jeonbuk had a disappointing first half of the match against Suwon, with Cho Sang-jun opening the scoring for the Gyeonggi side in the ninth minute. Cho was substituted for Han Seung-gyu, who scored Suwon’s second goal, taking the score to 2-0 at the end of the first half.

The second half took an unexpected turn when Suwon goalkeeper Yoo Hyun was sent off after receiving a second yellow card for hitting Gustavo of Jeonbuk while looking for the ball in the air. The foul gave Jeonbuk a penalty while Suwon were forced to take off an outfield player — Kim Seung-joon — to bring on reserve goalie Park Bae-jong. Gustavo scored, taking the score to 2-1 at 62 minutes.

With just 10 players on the field, Suwon made another devastating mistake in the 75th minute as Kim Gun-woong committed a foul in the box, giving Jeonbuk another penalty. Gustavo stepped up to the spot again, tying the score at 2-2.

Ulsan had a more successful outing on Sunday, defeating Incheon 3-2.

Oh Se-hun opened the scoring in the 52nd minute with Lee Dong-gyeong showing off some of his skills acquired from international experience, to add a brace in the 63rd and 68th minutes.

But Incheon wasn’t ready to go home just yet, as Stefan Mugosa scored Incheon’s first in the 79th minute. A few minutes later, VAR proved that Ulsan’s Dave Bulthuis had committed a foul while vying for the ball, giving Mugosa a penalty kick that he converted in the last minutes of the match. Despite Incheon’s attempts to come back, Ulsan’s three goals proved insurmountable in the end, as the game finished 3:2.

With the win, Ulsan takes a firmer grip on the top seat of the K League 1 table, with 54 points after 27 games. Jeonbuk has 47 points after 25 games. 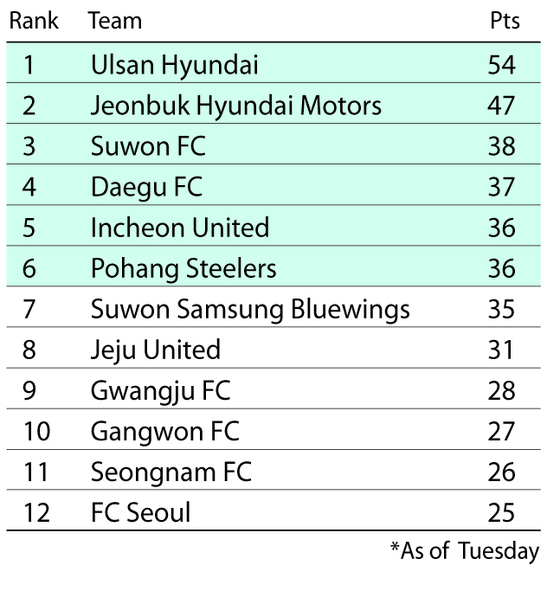 The K League is now on an international break until Sept. 10 while national team players compete in a series of qualifiers for the 2022 World Cup. There will be three games played during the break that were earlier postponed due to Covid-19 match cancellations. On Wednesday, Jeonbuk take on the Pohang Steelers. On Saturday, Seongnam will take on Daegu, while on Sunday, FC Seoul will face Jeonbuk.