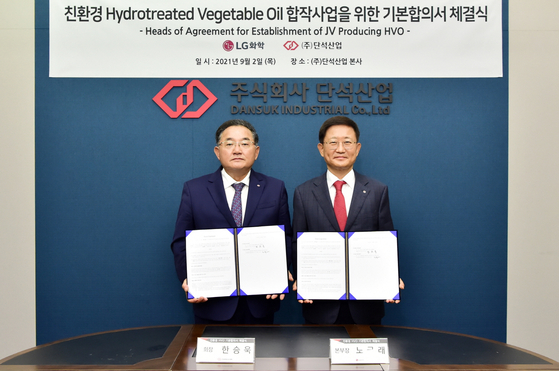 Noh Kug-lae, right, head of LG Chem's petrochemical business, and Han Seung-uk, chairman of Dansuk Industrial, pose for a photo after signing an agreement in principle to form a joint venture to build a plant that produces hydrotreated vegetable oil at the biodiesel maker's headquarters in Siheung, Gyeonggi, on Thursday. [LG CHEM]


LG Chem and Siheung, Gyeonggi-based biodiesel maker Dansuk Industrial have reached an agreement in principle to build a hydrotreated vegetable oil (HVO) plant in a move to ramp up the production of eco-friendly materials, the chemical company said Thursday.

Under a non-binding "heads of agreement," the two companies will form a joint venture to construct an HVO factory in the Daesan Complex in Seosan, South Chungcheong. The two will sign a formal contract in the first half of next year, with the goal of completing the construction by 2024. If constructed, it will be the first HVO plant in Korea.

HVO is renewable diesel fuels derived from hydrogenation and the hydrocracking of various vegetable oils, such as soybean, sunflower and palm oil, as well as animal fats. It can be used in conventional diesel engines, pure or blended with fossil diesel.

With global companies constantly moving to go green, demand for HVO, which was about 6 million tons in 2020, will grow to some 30 million tons by 2025, according to LG Chem.

With the factory, LG Chem will be able to build "infrastructure to secure raw materials that are needed to make polyvinyl chloride and super absorbent polymer (SAP)," the world’s first SAP material with ISCC Plus certification, an international certification for eco-friendly bio products that meet European Union's stringent Renewable Energy Directives standards. The chemical company aims to make up to 30 products that have the certification within the year.

This will allow Dansuk Industrial to gain a foothold in the HVO business using its capability in biodiesel exports.

The factory will be one of the 10 factories LG Chem vowed to build at the Daesan Complex to boost eco-friendly material production. In mid-August, LG Chem announced that it will invest a total of 2.6 trillion won ($2.2 billion) through 2028 to build 10 factories that can manufacture biodegradable materials and other materials related to electric vehicle batteries and renewable energy.

“With the agreement, LG Chem will be able to strengthen the stable supply of raw materials in order to expand the manufacturing of its eco-friendly products,” said Noh Kug-lae, head of the company’s petrochemical business.