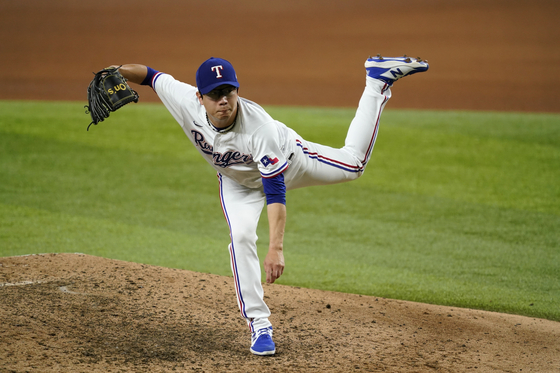 
Just a day after being sent back to the minor leagues, Yang Hyeon-jong was once again called up to join the Texas Rangers on Wednesday.

Yang's immediate return to the big leagues comes as MLB rosters are expanded from 26 to 28 players, creating room for the Korean southpaw in the Rangers' lineup.

Immediately after being called up, Yang appeared in a game against the Colorado Rockies on Wednesday, pitching one third of an inning with two out at the top of the ninth to close down the game for the Rangers.

Texas had blown a 5-4 lead at the top of the ninth, giving up five runs to take the score to 9-5 for the Rockies. Yang entered the game when the damage was already done, but was able to prevent the bleeding and get that crucial third out.

Yang was sent down to the minors on Tuesday after making a very brief return to the big leagues, appearing in a single game against the Houston Astros on Aug. 28, giving up three hits with one walk and one strikeout in two innings pitched. He was briefly sent down then the club reactivated Jonah Heim from the Covid-19 injured list, but returned immediately when the two new slots opened up.

Yang joined the Rangers on a minor league contract this season, was called up in late April and then sent down again in June after a difficult few starts. His ERA for the season now stands at 5.17.