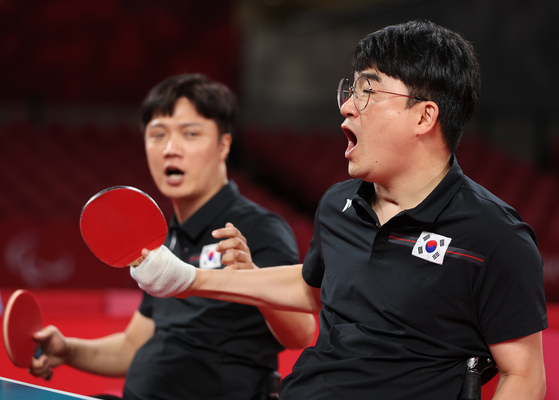 
Team Korea picked up one last table tennis silver medal at the Tokyo 2020 Paralympics in the men's classes one to two team event at Tokyo Metropolitan Gymnasium in Tokyo on Friday.

Korea put up a formidable fight against France, stretching the doubles match to five sets, but the French duo eventually emerged victorious.

Cha came on next in the first individual match to face Lamirault. It was the second time that Cha took on Lamirault at the Tokyo Games, as he had lost against the French player in the singles’ semifinals on Aug. 28 to win the bronze medal. The French player emerged victorious once again, taking the match 2-1 and winning the overall contest 2-0. France took gold and the Korean team settled for silver.

Despite missing out on a gold medal, Park and Cha both get to go home with one singles bronze medal and one team silver medal each.

There are 11 classes in Paralympic table tennis: Athletes in classes one to five compete in wheelchairs, while those in classes six to ten do so standing. Now all table tennis events have come to an end with Korea winning 13 table tennis medals at the Tokyo Games.