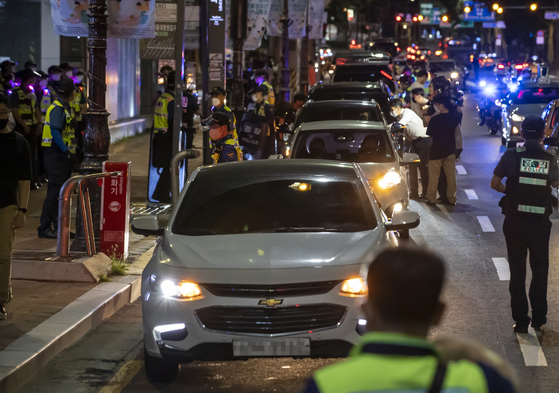 Small business owners protest the government's social distancing regulations while remaining within their cars in Seoul in July. [YONHAP]

Online sales accounted for 28.3 percent of all retail sales in July, up 1.9 percentage points compared to the previous year.

Mobile purchases are increasing rapidly. Online purchases made through a mobile phone amounted to 11.7 trillion won in July, up 34 percent compared to the same period a year ago.

Mobile purchases now account for 72.3 percent of all online purchases, up from 67.5 percent a year ago.

“Food delivery and online purchases of instant food products have increased as many stayed at home due to the Tokyo Olympics and the spread of Covid-19,” said a statistics agency official.

In July, food delivery sales were up 72.5 percent year-on-year to 2.4 trillion won, while online orders of groceries were up 30 percent to 2.7 trillion won.

These two combined account for 30 percent of all online purchase.

Mobile food delivery sales rose 77.5 percent year-on-year to 2.3 trillion won, indicating that 96 percent of orders were made via smartphone.

Grocery sales were up as well, increasing 35.7 percent to 2 trillion won, showing people are now shopping more via mobile phone.

The online retail industry has been enjoying strong growth during the Covid-19 pandemic as more people have stayed at home.

“With Covid-19, purchases of food and daily necessities online have surged,” said Ahn Ji-young, an analyst at IBK. “The natural digital transition in retail since 2020 has become complete.”

The recent joint venture between SK’s online retail arm 11st and Amazon is expected to add to the rapid expansion of the e-commerce market.

Last year, online purchase reached an all-time record high of 160 trillion won. At the current rate, the market is likely to again break that record this year.

The Ministry of Trade, Industry and Energy estimate the e-commerce market will hit 200 trillion won next year.

But the rise in online sales comes as small businesses continue to struggle.

According to government estimates, the accumulated revenue of restaurants and bars in the first seven months of this year when compared to the previous year was down 7.2 percent.

While the year-on-year drop has eased from the 12.9 percent declined during the same period in 2020, small business owners are planning to protest against the government’s extended social distancing regulations.

A coalition of small business owners announced Sunday that they will be holding a protest this week. Some 3,000 business owners are to participate in the protests that will be held in nine areas across the country. Protesters will stay inside their own cars to avoid breaking social distancing rules.

Some 1,000 vehicles participated in similar in-vehicle protests held between July 14 and 15, while similar protests were held for two days in South Gyeongsang and Busan.