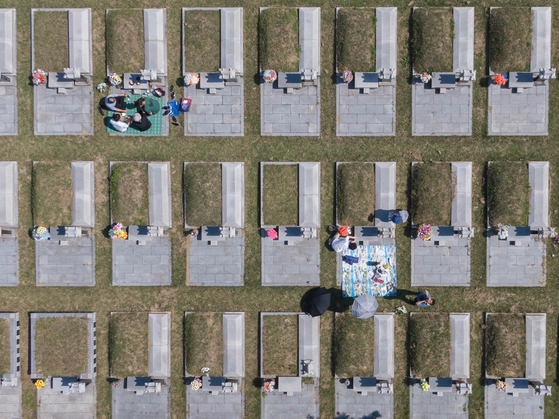 Families visit graves at a cemetery in Incheon Sunday ahead of Chuseok, the Korean harvest festival that falls on Sept. 21. All facilities except for the crematorium in Incheon Family Park will be closed from Sept. 18 to 22 to prevent the spread of Covid-19. [NEWS1]


Korea's Covid-19 vaccination rate for first doses exceeded those of the United States and Japan.

According to the Korea Disease Control and Prevention Agency (KDCA), 64.5 percent of the country's population had received one dose of a Covid-19 vaccine as of Saturday midnight, while 39 percent have been fully vaccinated.

Once struggling to buy vaccines, Korea’s vaccination rate has now surpassed both the U.S. and Japan.

According to global statistics site Our World in Data by the University of Oxford, the percentage of population that had received at least one dose stood at 63.99 percent in Korea as of last Friday, compared to 62.15 percent of Americans and 62.16 percent of Japanese.

Korea struggled to get its program into full gear due to initial shortages. After supplies became stable, the drive accelerated and reached three million people getting first doses on April 29, 10 million on June 10, 20 million on Aug. 3 and 30 million on Sept. 5.

“Thanks to the large number of people actively participating in vaccinations regardless of age groups, Korea is rapidly catching up with advanced countries [in the vaccination rate],” Prime Minister Kim Boo-kyum said in a virus response meeting last Friday.

Health authorities made clear that they are not considering mandating Covid-19 vaccinations in Korea. This comes as President Biden of the U.S. on Thursday mandated that a vast majority of American workers, including health care workers and federal employees, be vaccinated. In Korea, the government’s perception is that the vaccination drive is going smoothly as Koreans do not have much resistance to vaccines.

“[Rather than mandating vaccinations] We believe it is right to encourage vaccinations through giving various incentives for vaccinated people,” Lee Ki-il, first control officer for the Central Disaster and Safety Countermeasure Headquarters, said during Friday’s briefing.

In other Level 3 areas, private gatherings of up to eight people are allowed throughout the day if the groups include at least four fully vaccinated people.

“We plan to continue to provide incentives for fully vaccinated people,” Lee said.

With the accelerated pace of vaccination, the government’s Covid-19 vaccination target of 70 percent, or 36 million people, for first doses before the Chuseok harvest holidays, which fall on Sept. 20 to 22, seems achievable.

“We are equipped with enough medical infrastructure to inoculate up to 1.36 million people a day,” Prime Minister Kim said.

However, vaccines have yet to put a dent in confirmed Covid-19 cases — and the Seoul metropolitan area continues to see large numbers of daily infections.

There was one more virus death, raising the death toll to 2,359.

By region, the greater Seoul area took 74.4 percent of the domestic total, while infections outside the capital region accounted for the remaining 25.6 percent.

“[Infections] in the non-capital regions have become relatively stable, while the situation in the Seoul metropolitan area is still on alert,” Health Minister Kwon Deok-cheol said in a briefing on Sunday.

“The average daily new cases in the greater capital area was 1,234 last week, reaching another record high and are on the rise,” Kwon said.

He added, “We cannot let our guard down as the Chuseok holiday, which is just a week away, might serve as a trigger for infections to spread from the capital area to other regions like last summer’s holiday season.”

Starting Monday to Sept. 26, the government temporarily allowed patients and visitors in nursing homes to meet face-to-face if both are fully vaccinated — part of special virus control measures to be applied for the Chuseok holidays. If either is not fully vaccinated, they will have to communicate through windows or a device to keep them socially distant.