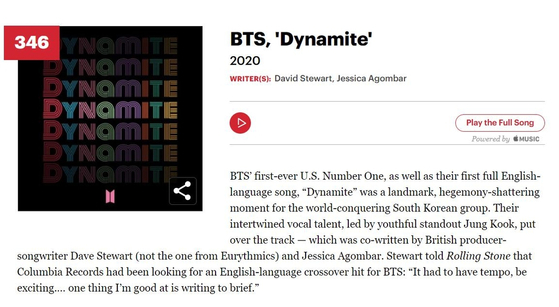 
BTS’s “Dynamite” was listed as one of the 500 greatest songs of all time by American entertainment magazine Rolling Stone.

“Dynamite,” which was the band’s first English single and its first to top the Billboard Hot 100 chart, ranked No. 346 on the list.

The magazine compiled the most recent list 17 years after its last which was published in 2004.

Including “Dynamite,” 254 new songs made the list after taking into consideration survey answered by 250 artists, producers, critics and journalists.

The No. 1 in the newly updated list went to “Respect” by Aretha Franklin. “Fight the Power” by Public Enemy and “A Change Is Gonna Come” by Sam Cooke each ranked No. 2 and 3.

According to the magazine, the new list covers a greater variety of music genres such as hip hop, modern country, indie rock, Latin Pop, reggae and R&B.

Meanwhile, the Seoul Tourism Organization announced Thursday that the teaser video titled “Your Seoul Goes On” in which the band features, has surpassed 67 million views between YouTube and its other social media channels.

The video was created to console business owners and the tourism industry struggling due to the prolonged Covid-19 pandemic, and to support medical staff on the frontline battling the virus.

The band is preparing to hold an online concert “BTS Permission to Dance On Stage” which will be livestreamed globally on Oct. 24.