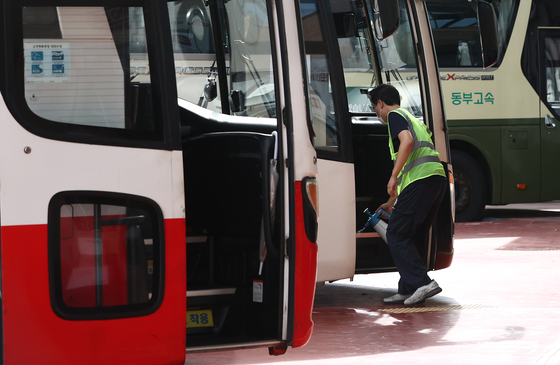 A public health worker disinfects a bus at the Seoul Express Bus Terminal in Seocho District, southern Seoul on Thursday ahead of the upcoming Chuseok holidays. [YONHAP]


In a bid to boost the fully-vaccinated rate and guard against the highly contagious Delta variant, Korea is allowing people to book their second shots with leftover Covid-19 vaccines starting Friday.

The Covid-19 Vaccination Task Force announced Thursday that second doses can be booked through the NoShow Vaccine system on Naver and Kakao, which offers last-minute reservations online for vaccines that are leftover from cancellations, or through waiting lists at medical facilities from Friday.

“The point is to have more people get fully vaccinated quickly by shortening the interval between vaccine doses within the permitted period, as well as to minimize unused leftover vaccines at medical facilities [...] and to protect against the spread of the Delta variant,” said Kim Ki-nam, the director of the task force's vaccination planning, during a briefing on Thursday.

Leftover vaccines had not been available to those who already had their first shot, as the second shot was automatically booked at the same medical facility as the first shot.

The government also returned to a standard dosing schedule.

Due to a series of delays in vaccine shipments in summer, the gap between the first and second doses of the two mRNA-based vaccines — Pfizer and Moderna — was extended to six weeks, while AstraZeneca was set at eight weeks.

With the leftover vaccines, people who received the Pfizer vaccine can now book a second shot three weeks after their first, four weeks for Moderna and four to 12 weeks for AstraZeneca.

However, Pfizer and Moderna recipients not booking their second shots through the NoShow Vaccine system will still get their shots six weeks later.

“We separately have to review adjusting the inoculation interval altogether,” Kim said. “We have to consider the vaccine supplies for September and October and the vaccination capacity of medical facilities including flu shots.”

Once booked for a no-show vaccine, the existing booking for the second shot will automatically be canceled.

Leftover vaccines can only be booked for the same vaccine type as the first shot — except for those under 50 who received first dose AstraZeneca vaccines, as they can get Pfizer shots for their second as part of the country’s mix-and-match vaccinations.

Those wishing to get leftover vaccines, including foreigners covered by Korean health insurance, can check available vaccine doses in nearby clinics and hospitals in real-time through Naver and Kakao, and make a reservation on the same day.

In addition, people who missed the chance to book a reservation will have another chance next month.

Health authorities said Thursday that unvaccinated people aged 18 and over — estimated to be around five million people in Korea — can get their vaccines from Oct. 1 to 16. The government previously said that those who refused to make a reservation during their allocated dates would be pushed back to the last vaccination group.

These people can reserve for a vaccine from 8 p.m. on Sept. 18 until 6 p.m. Sept. 30 on the official vaccine reservation website (https://ncvr.kdca.go.kr).

The country aims to give at least one jab to 70 percent of the population before the Chuseok harvest holidays on Sept. 20 and complete their inoculations before the end of October.

According to the Korea Disease Control and Prevention Agency (KDCA), 68.1 percent of the country's population had received one dose of a Covid-19 vaccine as of Wednesday midnight, while 41.2 percent have been fully vaccinated.