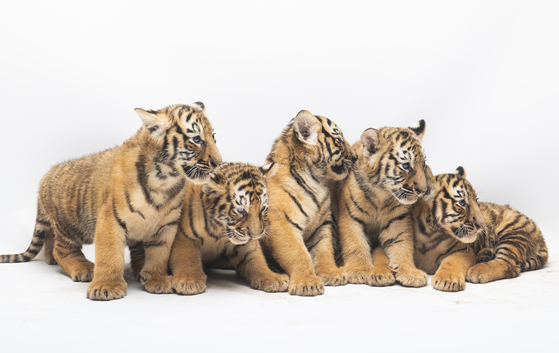 Everland, a Samsung C&T-owned amusement park with a zoo in Yongin, Gyeonggi, released photos of five sibling Korean tiger cubs on Thursday. Everland also announced the cubs’ names, which were voted on by the public: Ah-reum, Da-un, Woo-ri, Na-ra and Gang-san. The five cubs were born to father tiger Tae-ho and mother tiger Geon-gon on June 17. The cubs are available to see by the public at Everland Zoo’s Tiger Valley. Korean tigers, which are categorized as a Class One endangered species in Korea, usually give birth to about two to three cubs - this recent birth of five cubs is considered a very rare happening worldwide. [NEWS1]