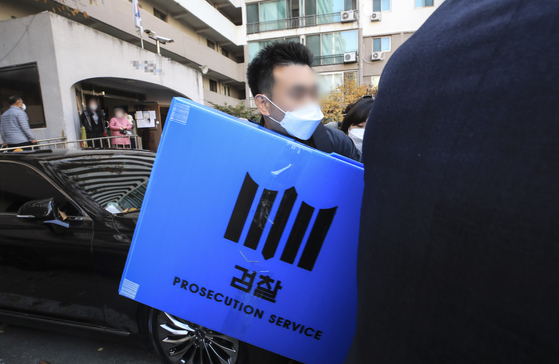 
Prosecutors investigating the Daejang-dong development corruption scandal on Wednesday raided the home and office of former People Power Party (PPP) lawmaker Kwak Sang-do, who has come under suspicion concerning his son's massive severance pay from a company at the center of the scandal.

The investigation team of the Seoul Central District Prosecutors' Office on Wednesday morning sent prosecutors and investigators to Kwak's residence in Songpa District, southern Seoul, and to the office he used before he resigned from his legislative post to secure documents and data.

Prosecutors suspect the former PPP lawmaker helped Hana Bank set up the development consortium and enabled Hwacheon Daeyu, a small asset management company which held just a 1 percent stake in the Daejang-dong development project, to reap astronomical profits from the development in return for hiring his son.

Prosecutors suspect that Kwak was indirectly involved in the development by requesting Kim Jeong-tae, a fellow university alumnus and the president of Hana Bank’s financial arm, not pull the bank out of the consortium.

Kwak’s 31-year-old son reportedly received 5 billion won ($4.2 million) in severance pay in March from Hwacheon Daeyu after working there for about seven years.

The amount of money that Kwak’s son received was more than 200 times his legally entitled retirement payment when considering his reported monthly salary of 2.5 million won.

The revelation that his son received such a massive amount of money upon leaving Hwacheon Daeyu aroused suspicions that the lawmaker was part of the alleged “5 billion won club” of politicians and government officials promised money by Hwacheon Daeyu in exchange for helping the previously little-known asset management company rake in a profit of 57.7 billion won since 2019 on an investment of 49.95 million won — an outsized gain compared to its 1 percent stake in the project.

After the amount of his son’s severance payment came to light, Kwak resigned from the PPP on Sept. 11 and then the National Assembly on Nov. 11.

However, he continues to deny that he was a member of Hwacheon Daeyu’s alleged club of individuals who granted favors to the company in exchange for bribes.

In a social media post Kwak uploaded after his resignation from the legislature, he claimed that he “did not partake in any business related to the Daejang-dong development or Hwacheon Daeyu,” nor did he “get involved in any way.”

Meanwhile, prosecutors also said Wednesday that they plan to summon lawyer Nam Wook, another key suspect in the scandal, for questioning.

Nam, who was formally arrested by a court-issued warrant on Nov. 4, is suspected of being the true owner of Hwacheon Daeyu affiliate Cheonhwa Dongin No. 4.