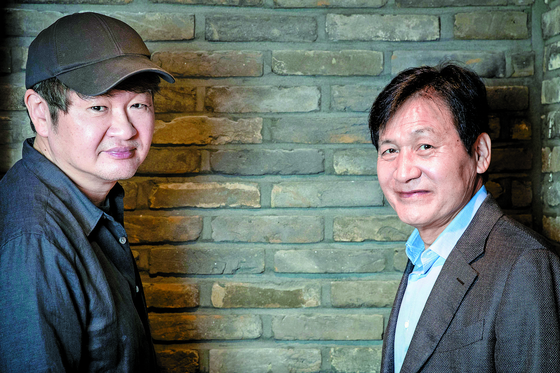 Director Hur Jin-ho, left and actor Ahn Sung-ki pose for a photo. Hur is the president of the jury for the GwangHwamMun International Short Film Festival, and Ahn is the director. [JANG JIN-YOUNG]

The six-day run of this year’s event dubbed Gisff is being held in partnership with Pandora TV and its subsidiary film-distribution platform MovieBloc. The festival, which has spotlighted short films for the past 18 years, found itself in danger when Asiana Airlines decided to stop its funding earlier this year.

The new name took inspiration from the area of Gwanghwamun where the very first edition of the festival too place.

Ahn Sung-ki, who has been the director of the festival for the past 17 years, revealed that this aim of this year's festival is to help create new opportunities for short films online while still finding ways to entertain avid theatergoers. Director Hur Jin-ho of 1998 film “Christmas in August” is acting as the president of jury for this year's Gisff. The two sat down with the JoongAng Ilbo, an affiliate of the Korea JoongAng Daily, at a cafe in Gwanghwamun before the opening of the festival on Oct. 14.

Ahn personally asked director Hur to head the jury for the festival, a role which has previously been filled by directors Park Chan-wook, Jang Joon-hwan and Kim Han-min.

The pair's friendship began with the 1993 film “To the Starry Island,” made by director Park Kwang-su. Ahn was the lead in the film and Hur was on the directing team. Since then, they have maintained their relationship despite never working on a movie together again.

Hur, known for many different melodramas such as “One Fine Spring Day” (2001), “The Last Princess” (2016), has previously made two short films, “The Present” (2019) and “Two Lights: Relumino” (2017). The director who is currently directing cable TV channel JTBC’s “Lost,” his first TV drama, said reviewing movies for the first time in a long time has been quite tough.

In previous years, some of the winning films of the festival would be shown as inflight movies on Asiana airlines flights. With that possibility no more, the festival decided to screen the entries online. The festival of course still centers around the screening of films at theaters, but the same works will also be available to watch online for two weeks. Aside from the movies that will be awarded during the festival with votes from the jury members, a new award has been established in the international competition, titled MovieBloc Audience Award that will be decided based on voters from online audiences. 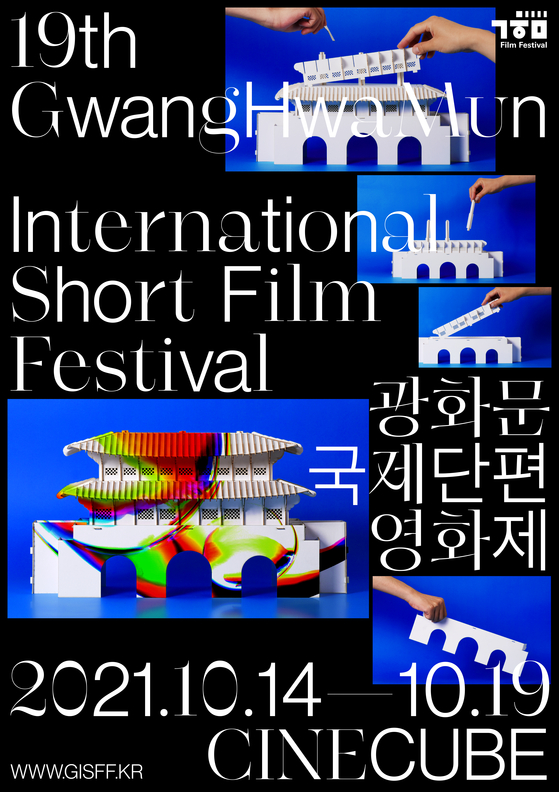 The poster for the GwangHwamun International Short Film Festival [GISFF]


For this year’s festival, a total of 65 films were selected to compete from 5,219 works that were submitted to the organizer from 121 different countries. These films will be reviewed in three different categories  — the International Competition, Korean Competition and New Filmmaker Competition.

In total, 84 different short movies from 36 different countries will be screened. For the opening, “The Letter Room” by director Elvira Lind featuring actor Oscar Isaac, well-known for the 2013 film “Inside Llewyn Davis,” will be screened for the first time in Asia. The film is the director's first attempt at the short film genre after years of making documentaries.

In the Korean competition, an award titled “Face in Shorts Award” will honor one actor. Actor Byun Yo-han and the winner of last year’s award Byeon Jung-hui are part of a special jury to choose the winner. Byun Yo-han was previously nominated in this category for 2015 short film “Tylenol,” which he was the lead of.

“Short films are rough and sometimes less refined, but they carry an essence that [we] should not forget,” said Byun Yo-han. “It is charming that many take on very radical challenges, so it took me some courage to serve this mission as I want to learn more and communicate more.


Q. What is the charm of short films?

A. Hur: It makes me think once more about the ways I create certain things. It also reminds me of the time when I started to work in the movie industry and wonder what I did. It really brings me back to the past me sometimes. It is also entertaining to see all the experimental ideas from the people who are starting in the scene now.

Ahn: Short films have a very dense story to tell and carry a single story line. I like how they focus on one thing and unravel that one story.


How much does it cost to make the festival each year?

Ahn: Each year’s budget is about 600 million won ($503,000). We are thankful that our sponsor did the difficult work for us to fund the event.


Will the budget be enough for the festival to continue running, and hopefully invite some overseas talents in the future?

Ahn: Maybe at least one or two years need to pass before we can consider such options.

What are the ideas being talked about more for this year’s edition?

Ahn: Although we have not yet specified all the details, we are talking more about the online programs.

What are the good and bad things about the movie industry going online?

Hur: This feels like the time when we were going from using actual film to digital. There are of course good things that come with the change and some bad things. There are a lot of differences I have noticed in short films from the time I started making movies. As things went digital, the technology became really convenient. The overall quality went up. Some of the short films really showed good filming skills, as well as lighting.

What do you consider when you review short films?

Hur: I want to check if there’s any lasting emotions after I’m done watching the film. I’m going to collectively check whether the film is sympathetic while it also brings forth some experimental characters.


What is the most disappointing change you have noticed in recent years?

Hur: It is the space [where the audience watches the film.] The little details we care so much about when making a movie, such as lights and sound have become difficult to notice through a smaller screen. Even the littlest details of acting, which can easily be shown through a large screen, don’t show as well. Also, people don’t usually leave the theater while watching a movie, [but now the audience can just shut down what they watch instantly]. As many changes are happening in the industry overall, what we worry about has become different than before.