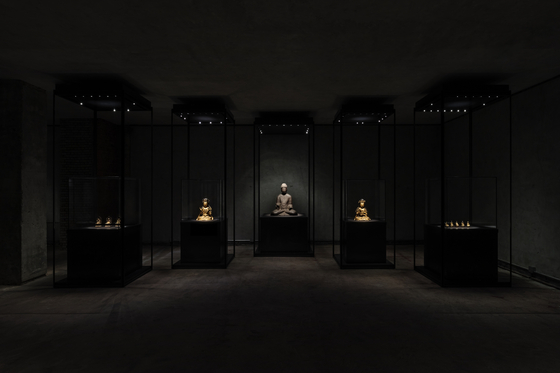 Buddhist sculptures including the Amitabha Buddha Triad, left, which is being exhibited for the first time, are displayed in the second section of the Hoam Art Museum's special exhibition ″Metallurgy: Great Wisdom.″ [HAN DO-HEE]


Metallurgy may be an unfamiliar term, but according to the Hoam Art Museum, “this metal art tradition is where Korean art history began.”

“It’s a comprehensive term referring to the process and products of handling metals with fire," said Lee Kwang-be, curator of a new exhibit at the museum. "Korea’s longstanding and proud metallurgy tradition is embedded in a vast body of Korean cultural properties, including ancient bronzeware, gold crowns and accessories, steel weapons and Buddhist sculptures and craftworks.” 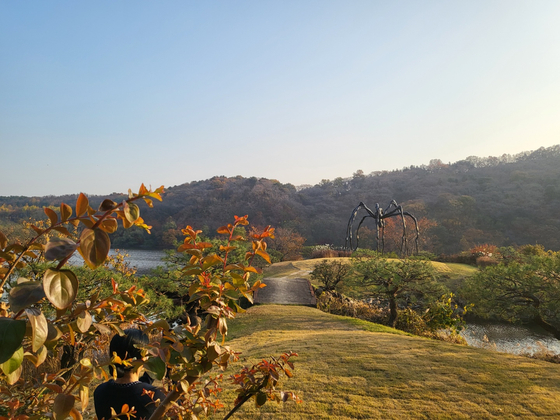 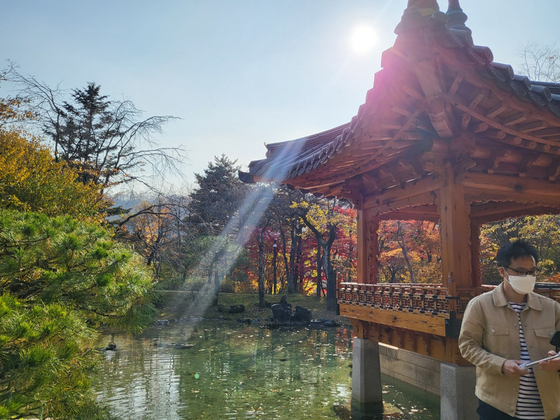 A pavilion in the garden of Hoam Art Museum in Yongin. [YIM SEUNG-HYE]


The Hoam Art Museum in Yongin, Gyeonggi, has been under renovation after closing its doors last February as a result of the pandemic. It is the first major renovation since the museum was established 40 years ago. The museum decided to organize a special exhibit to provide direction for the museum’s 40th anniversary next year - with the renovation going on all around.

The walls of the exhibition rooms on the second floor are torn down. Renovation has begun on the special exhibition hall on the first floor. Surrounded by exposed concrete walls, the exhibit “Metallurgy: Great Wisdom” kicked off last week. It will run through Dec. 12.

“The bronze culture began to emerge in Korea by means of metallurgy around the 10th century and continued to gradually develop throughout the bronze age,” said Lee. “The development of technology led to the utilization of jewelry involving gold, silver, crystal, jade and glass, and the development of decorative techniques such as granulation, silver or gold inlaying, and mother of pearl inlaying. Considering that the main components of metallurgy include the mining of ore and control of fire, the history of metallurgy is closely related to the overall development of human civilization.” 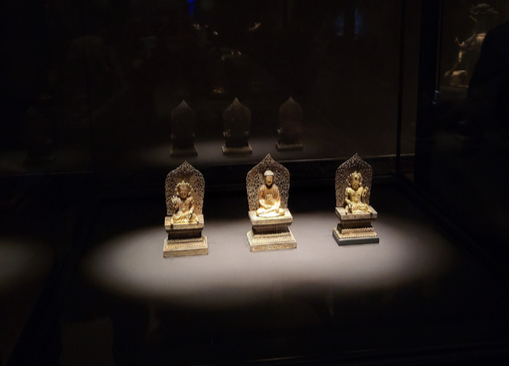 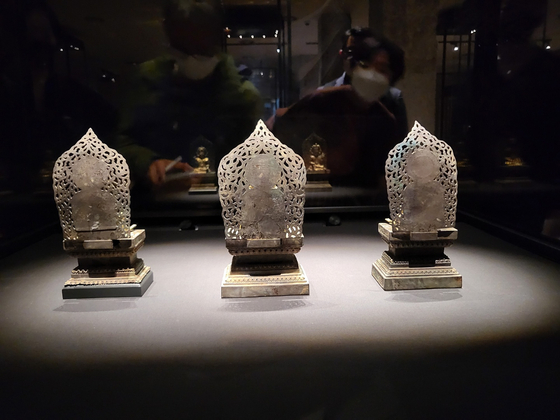 Amitabha Buddha Triad is exhibited for the first time by the museum. [YIM SEUNG-HYE]


The museum illustrates this relation by displaying artifacts from different times, from a sword excavated from a tomb dating to the early Iron Age in Bisan-dong, Daegu, to a gold crown and ornaments dating to Gaya (42-562), to a Miniature Buddhist Banner Pole with a dragon Head of the Goryeo Dynasty (198-1392). 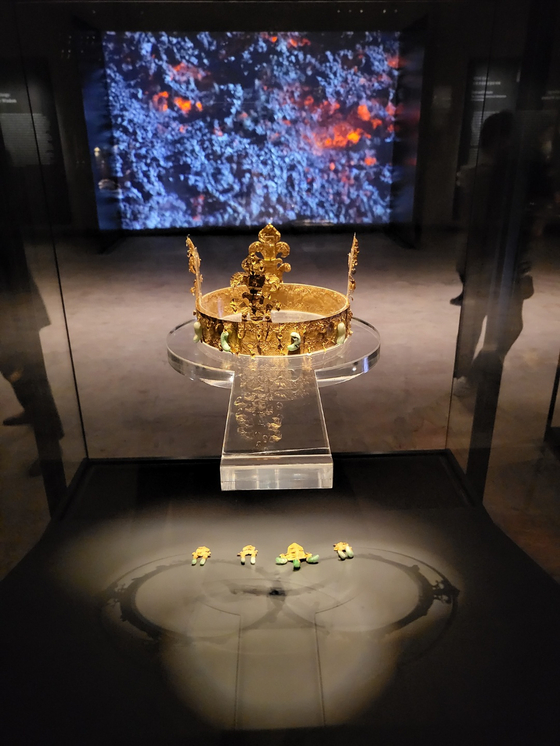 The gold crown and ornaments dating to Gaya (42-562), which is a National Treasure [YIM SEUNG-HYE]

“This exhibition features numerous masterpieces of metal art,” Lee said. “We hope it helps visitors to understand how Korea’s current prominent position in fields involving steel and materials engineering, such as semiconductors, in science as well as the arts, has been achieved based on the precious tradition and great wisdom of metallurgy.”

The Hoam Art Museum was founded in 1982 by the founder of the Samsung Group Hoam Lee Byung-chull (1910-87), based on Korean artifacts he collected over the last 30 years of his life. The Hoam Art Museum specializes in antiques while Samsung's Leeum Museum of Art in Yongsan, central Seoul, displays contemporary art.

“Metallurgy has been passed down not just as a technique but as an inherited wisdom of the Korean people. In the arts, the abundant expressive potential of metallurgy can be observed in the wide array of works by both traditional artisans and contemporary artists who reflect the aesthetics of their times,” said Lee. 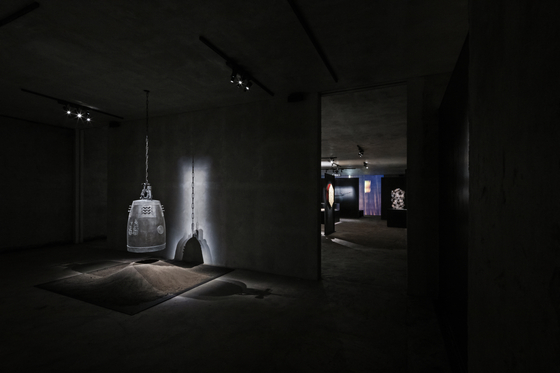 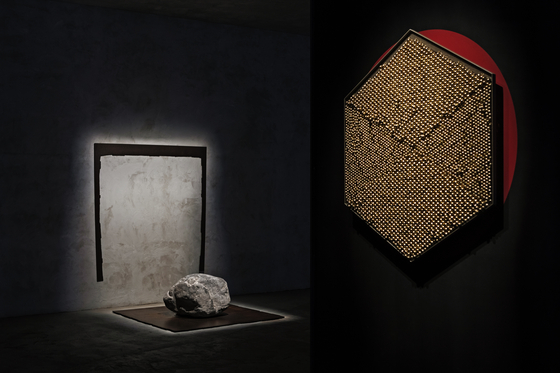 
The exhibit is divided into three parts, “God and Nature: The Enduring Aesthetics of Abstraction and Symbolism,” “Kings: Royal Authority and a Longing for State Protection,” and “Art: Great wisdom and Eternal Art.” The works on display include five National Treasures, two Treasures and works created by holders of national intangible heritage.

Aside from the treasures on display, the design of the exhibit is a unique way of showing priceless antiques. It’s more like a contemporary art exhibit, designed with sophistication and flair by fashion designer Jung Ku-ho, who has been involved in designing museums and stage sets for performances. Jung was also the creative director for the Leeum's recent renovation. 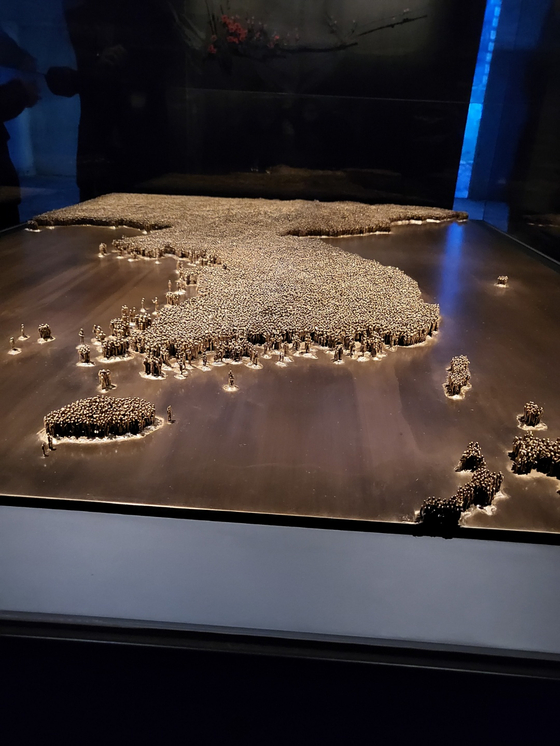 “Hoam has been recognized as a museum that only exhibits old works but now we attempt to showcase the current flow of art to become a global museum that introduces Korean artists to Koreans and beyond,” said an official from the museum. The renovation is scheduled to go on until April.

“We’ve decided to leave the exposed concrete and got rid of the conventional partitions that divide the sections. This is to allow visitors to enjoy the exhibit organically, viewing the whole exhibit in 360 degrees without leading them on a set route,” said Lee. The showcases are also designed using metal, while the artifacts are displayed as if they are afloat.

“This is the exact reason why we are renovating the museum, which has turned into a ‘forgotten museum,’” Lee added. “With the renovation, the museum will present new exhibitions that blend the traditional culture of Korea with contemporary art.”