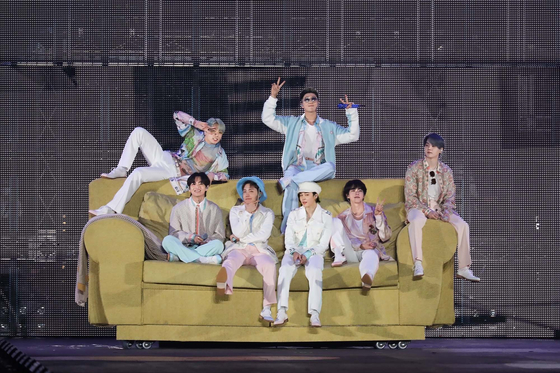 BTS performs in the ″BTS Permission to Dance on Stage″ concert, which was streamed live on Oct. 24. [BIT HIT MUSIC]

The digital single won the Record of the Year category in Variety's 2021 Hitmakers list released Friday, according to Big Hit Music and the website of the magazine.

"The song 'Butter' blasted out to the world in May, becoming a record smashing single for BTS," Variety said on its website.

It is the K-pop band's second time on the Variety list. Last year, it was named Group of the Year, becoming the first Korean act recognized by the annual Variety celebration.

The annual event recognizes the writers, producers, publishers, managers and executives who helped make the 25 most consumed songs of the year. Its award ceremony is set for Dec. 4.

On Sunday, the band was set to attend the 2021 American Music Awards at the Microsoft Theater in Los Angeles, for which it was nominated in three categories, including Artist of the Year, considered the biggest honor of the show.

Meanwhile, the music video for BTS's "Dynamite" passed 1.3 billion views on YouTube. The video for the megahit released in 2020 reached the milestone at 10:15 p.m. Friday, Big Hit Music said.

BTS has a total of 35 music videos with more than 100 million views on the global music sharing site.


"Dynamite" is its first English-language song. The song made BTS the first Korean act to debut at No. 1 on the Billboard Hot 100 main singles chart in 2020 and earned the group its first Grammy nomination.