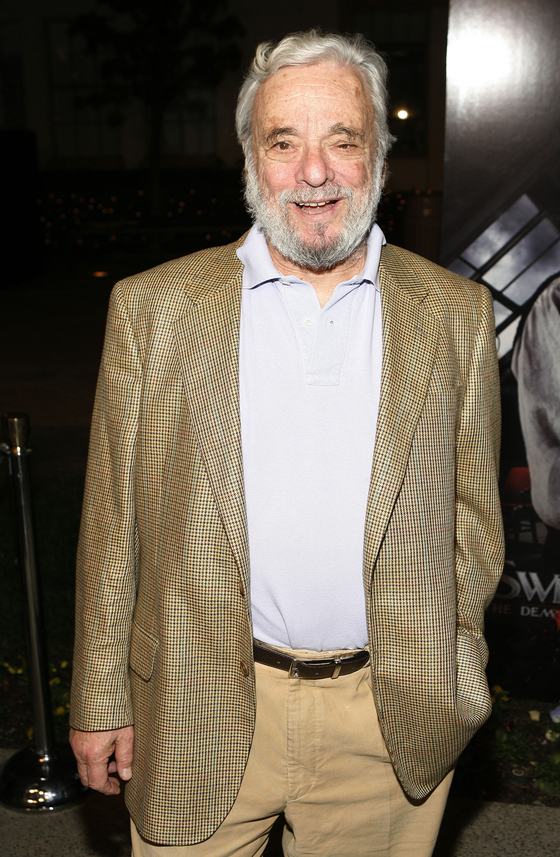 Stephen Sondheim arrives at the premiere of ″Sweeney Todd: The Demon Barber of Fleet Street″ in Los Angeles, on Dec. 5, 2007. Sondheim, the songwriter who reshaped the American musical theater in the second half of the 20th century, has died yesterday at age 91. [AP/YONHAP]

I saw the first Broadway revival of Stephen Sondheim and Hugh Wheeler’s “Sweeney Todd: The Demon Barber of Fleet Street” in 1989. In the New York Times, Frank Rich wrote that a smaller theater made the revival more emotionally engaging than the original production a decade earlier. According to Rich, the apex of the first act was the scene in which Todd is reunited in London with his razors, which he will use to avenge his wretched past — unjust transportation to Australia and the loss of his wife — by murdering people both innocent and guilty. Todd cries, ’'At last my arm is complete again!'"

But at my performance, the audience found a different apex, "A Little Priest," Act One’s closer. Todd and his partner-in-crime, pie shop proprietor Mrs. Lovett, agree to pursue profit along with revenge by using the ground-up corpses of Todd’s victims to fill meat pies. They imagine how the tastes of the pies will differ depending on the victims’ occupations. British class distinctions runneth over.


The final lines of the song are sung as the couple link arms and brandish long knives in their free hands:

“We'll not discriminate great from small.

Meaning anyone,
And to anyone


The curtain fell and, in my life, I have never heard such amazed, lusty, unwilling-to-let-it-go cheering from an audience in a theater.


“A Little Priest” is a reminder of the importance of comedy in the musical-comedy, America’s art form – the reason Sondheim, who died yesterday at the age of 91, abandoned an early attempt to adapt the humorless “Sunset Boulevard” to Broadway. It’s a particularly funny piece of theater. In mid-song, Lovett appeals to Todd, who acts like a customer for the new line of human mincemeat pies: “Since Marine doesn’t appeal to you, how about Rear Admiral?”


Todd: “Too salty. I prefer General.”


Lovett: “With or without his privates?”


This so-called list song with a fairground, oom-pah-pah tune has plot to consolidate and theme to elucidate. ("It's man devouring man, my dear," Todd sings, "and who are we to deny it in here?”) Yet Sondheim finds time to work in an extended reference to the process of songwriting itself. As Lovett offers Todd pies, he rejects them – in rhyme.


Lovett can only end the exchange by coming up with an occupation with no rhyme, which she does.


In the two volumes of his collected lyrics -- "Finishing the Hat" (2010) and "Look, I Made a Hat" (2011) -- Sondheim dedicated a chapter to the importance of rhyme in his art. For the layman, he explained the two main types: the true or perfect rhyme (love and glove, pain and gain) and the near or false rhyme (home and alone, dark and heart). He was generous about the latter, saying that generations of pop composers -- one also thinks of the rap world -- may have found them more fluid or liberating than true rhymes.


"Using near rhymes is like juggling clumsily," he wrote. "It can be fun to watch and it is juggling, but it's nowhere near as much pleasure for an audience as seeing all the balls -- or in the case of the best lyricists, knives, lit torches and swords -- being kept aloft with grace and precision."


Sondheim relished such infinite, hazardous variety. He could be spare with his rhymes -- as in the haiku-inspired "Poems" from "Pacific Overtures" -- or cram so many into a song that a criminal complaint was warranted for performer abuse ("Not Getting Married Today" from "Company," "The God-Why-Don't-You-Love-Me Blues" from "Follies," “Putting It Together," from "Sunday in the Park With George”).


But songwriting isn’t juggling. Circus arts are spectator sports: they don’t inspire people to blow themselves out of canons. Writing a song for a musical or any other medium is nothing less than an offering to the world. The world must decide whether to accept it or not — to sing it or not.


When it does, the words are often why — "the sheer pleasure of verbal playfulness,” as Sondheim described.

Sondheim learned this from mentor Oscar Hammerstein II, lyricist of the most important plays in the musical-comedy canon, including "Oklahoma" and "Carousel." It’s my opinion that writing for the musical-comedy reached a high with the two sung introductions Hammerstein wrote for "Hello Young Lovers" and "Shall We Dance?” in "The King and I.”


In the latter, Anna Leonowens, English tutor to the children of the Court of Siam, has to explain to King Mongkut the custom of ballroom dance, rooted in a courtly love tradition alien to the Siamese. This will lead to the most romantic dance ever staged (and later filmed).

But her words come first.

“I do not know you well,
But when the music started
Something drew me to your side.
So many men and girls,

Are in each other's arms --

It made me think


"Similarly occupied" was an attempt to make Anna sound veddy English. But it also makes you have to sing the line.


In "Send in the Clowns" from "A Little Night Music," one of the few Sondheim songs to crack the pop music charts, the line most irresistible to sing is the complicated third one in this verse:

My fault, I fear.

I thought that you'd want what I want


In contrast, Jerry Herman’s "Hello Dolly," a bonafide Broadway showstopper for more than 50 years, has never inspired anyone to sing because its lyrics have no interest and absolutely no meaning.

Sondheim was asked innumerable times to name his favorite song, He called the request "understandable but unanswerable,” and yet usually cited “Someone in a Tree” from “Pacific Overtures.” One suspects the complications of the song appealed to the known puzzle fanatic. (Sondheim was a model for the murder mystery author who enjoys playing lethal games In Anthony Shaffer’s “Sleuth.”)


“Someone in a Tree” describes 1854 negotiations between American Commodore Matthew C. Perry and representatives of the Japanese Shogunate to open the country to trade. The talks in a purpose-built Treaty House are remembered years afterward. The singers are the Reciter, a narrator device borrowed from Kabuki theater; an old man who witnessed the negotiations as a boy by peeking through the beams of the Treaty House from a tree branch; a 10-year old avatar of the old man restored to the current day; and a similarly restored warrior positioned beneath the floorboards of the house. (His mission was to kill the Americans if ordered by his superiors.)


In the song, the boy reminds his older self what he saw from the tree; the warrior relates what he hears from below — two halves of one story. The theme is that history is fractious and depends on individuals both important and insignificant.

It's the pebble, not the stream.

It’s the ripple, not the sea.


Sondheim takes the idea to a mystical and theatrical conclusion: historical events and their witnesses — especially the insignificant ones — can’t be distinguished, one is not possible without the other. The old man sings: “If it happened, I was there!” The warrior takes the opposite line: “Since I hear them, they are there!”


These are thrilling lines to sing because of the romantic idea being developed — and the “swing and relentlessness of the music,” as Sondheim describes it.


When word play is put at the service of pure emotion, the effect is strongest. "Good Thing Going" from "Merrily We Roll Along" is a sad song about the collapse of a long friendship between two men who happen to be Broadway musical partners. The first verse ends with the line, "We had a good thing going," referring to a platonic love stretching across decades. The second ends with a variant, "We had this good thing going." The song itself ends with the sentiment taken to its worst conclusion: "We had a good thing going ... going ... gone." It's a favorite among shower-singing Sondheim fans.

Sondheim’s wordplay could be convoluted or overly clever. In "Follies," the story of a reunion of performers from a Ziegfield Follies-like review from World War II, the aging Broadway babies make their entrance to theatrical piano chords, flowery lyrics and the fruity voice of Master of Ceremonies Roscoe in the opening number "Beautiful Girls."


"This is what beauty can be," Roscoe sings.


That may be perfect rhyme, but one critic accused Sondheim of comparing middle-aged ladies to cattle and hogs. Her ear heard:


At the reunion, former showgirls Sally and Phyllis are accompanied by their husbands. Unfortunately, the psychologically unstable Sally believes she has been in love with Phyllis's husband Ben since 1941.


For a 1987 revival of "Follies" in London, Sondheim was asked to write a new solo for Ben, "Make the Most of Your Music." Ben is a successful businessman and philanthropist. The song is a confession of a life entirely faked, or in Ben’s metaphor, musically composed.

"To give it style,

A note of glitter,

A note of guile,

A note of tact,

A note of friction,

A note of fact

In amongst the fiction.

A note or two of complete conviction.


Ben is a quintessential Stephen Sondheim composition: a failed human being — a shirt stuffed with grace notes and sad trombones — belting out the dark side of his soul downstage center with a panache and verbal dexterity that only prove his hypocrisy and toxic aspirations.

According to Irving Berlin, that other American master of both words and music, "It's the lyrics that makes a song a hit, although the tune, of course, is what makes it last.” Sondheim didn’t produce hit after hit like Berlin. But his six-decades of lyrics that bring characters to life, explore ideas and complex emotions, and get an audience to cheer itself hoarse will last — and in his chosen art, that means making people sing.

Anthony Spaeth is Editor in Chief of the Korea JoongAng Daily.