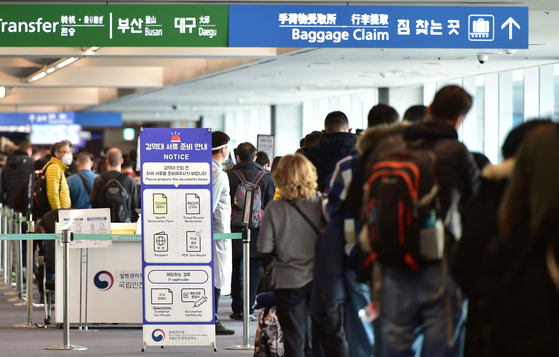 Passengers at the Incheon International Airport Terminal 1 on Monday [NEWS1]


Airlines are in a holding pattern as the Omicron coronavirus variant threatens to shut down travel worldwide.

Airlines say they are operating flights as usual and are ready if new restrictions are announced.

Omicron, first detected in South Africa, was declared by the World Health Organization a “variant of concern” last week. The virus has been detected in countries that include Australia, Belgium, Britain, Denmark, Hong Kong and Germany.

Korean Air Lines said it does not plan to resume old routes or start new ones next month, but is planning to raise the frequency of flights to certain destinations. Asiana Airlines is resuming a flight to Guam next month for the first time in 18 years. Other than Guam, Asiana is only increasing flights to already-flying destinations.

The airlines said those plans could face big detours depending on how the situation with the variant develops.

Airlines are worried that the new variant might nip a return to normal passenger business.

“Though full-service carriers have thrived on the cargo transportation since the Covid-19 outbreak began, the airline industry will become normalized only when demand from passengers starts to rise,” said an industry insider. “The situation isn’t really favorable at this point.”

A spokesperson for low-cost carrier Air Busan was more sanguine.

“There have been Covid-19 variants in the past, but the situation has changed as more people are vaccinated,” said Lee Jin-soo, a spokesperson for Air Busan. He said he is less “anxious” about the development of the Omicron.

The vaccines' effectiveness against the Omicron variant is not yet clear.

Lee added that the number of reservations for Air Busan December flights has not changed much since the variant was discovered.

“There hasn’t been a visible change in demand for travel packages because there weren't many reservations in the first place,” said Hanatour Service, Korea’s leading travel agency. The company added that it received some inquiries about cancellations over the past several days, but not many.

“The impacts of the latest virus variant is paradoxically limited on Korea’s travel industry because Korea has been [one of] the slowest countries to see a recovery in travel demand,” said Choi Go-woon, an analyst at Korea Investment & Securities in a report released on Monday.

“Airlines are projected to see their passenger business swing to profit in the second half of next year, and reservations for overseas travel are expected to grow in the first quarter of next year. So there’s enough time for airlines to respond” to the Omicron variant.