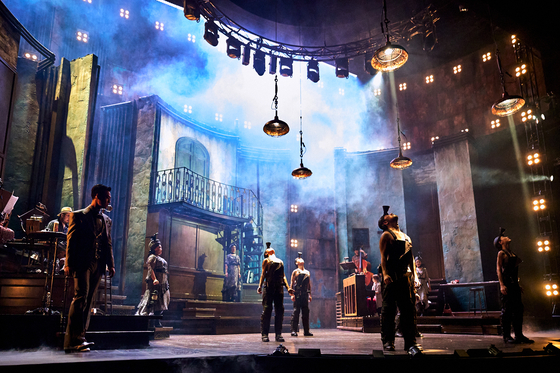 
The Korean production of Broadway’s smash-hit musical “Hadestown” will celebrate its 100th performance Thursday evening at the LG Arts Center in southern Seoul.

Fresh off Broadway, the musical premiered in Korea this summer as the show's first overseas production and is also the only ongoing production of “Hadestown” outside New York.

Just ahead of the big milestone, Broadway producers of “Hadestown,” Mara Isaacs and Tom Kirdahy, flew in to Seoul to see the Korean production in person on Nov. 26.

“Seeing ‘Hadestown’ on stage in Seoul was thrilling,” Kirdahy said after the show. “It’s the first time I’ve seen the show in a different language, and I cannot imagine a better production […] the talent and production values are truly world-class.”

A sung-through musical, the music and lyrics of “Hadestown” are written by Anaïs Mitchell. Since its debut on Broadway in 2019, the musical has won eight Tony Awards including Best Musical and Best Score, and a Grammy Award for Best Musical Album.

The show is a modern spinoff of the Greek tragedy of Orpheus, an impecunious musical genius working on a song to bring the spring season back to a world where it is always either bitter cold or sweltering hot because Hades, tyrant of the underworld, takes his wife Persephone, goddess of spring and growth, with him down into the depths every few months in fear that she will love someone else if she stays apart from him for too long.

The plot kicks off as Orpheus’ music inspires hope of a warm home and love into a realist runaway named Eurydice. The two fall in love and get married. But the young couple is poor and, while Orpheus buries himself in his musical work, Eurydice grows cold and hungry. Lured by Hades who says he will give her a job and shelter in the underworld, desperate Eurydice decides to leave her lover and journeys downward. Orpheus, later realizing that Eurydice has left, follows her to the underworld. 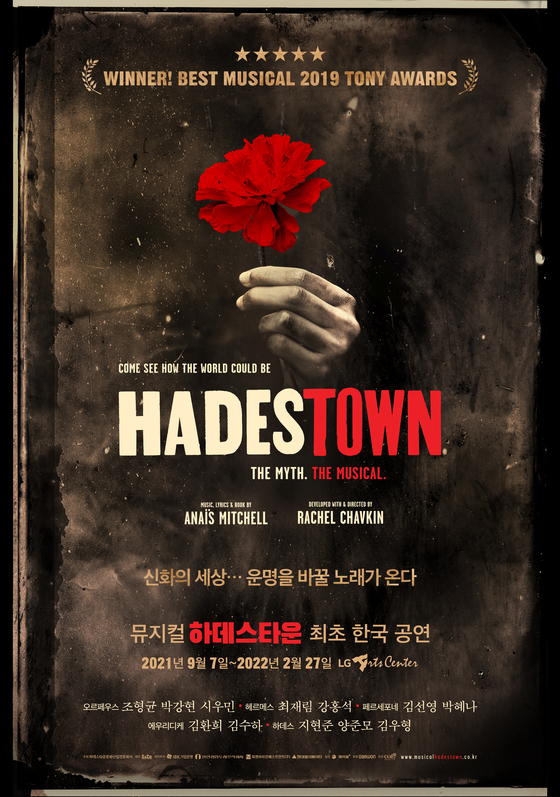 Poster of the Korean production of "Hadestown," which is being staged at the LG Arts Center in Gangnam District, southern Seoul. [S&CO]


Eurydice’s character, in particular, has been altered from the mythological tale’s cookie-cutter damsel in distress who Orpheus comes to rescue when she falls into the underworld after getting bit by a venomous snake.

In the musical, however, Eurydice is portrayed as an active female who makes her own choices, no matter how regrettable, and owns up to them.

Like this, “Hadestown” tells the few thousand-year-old story with modern twists so as to retain relevance with the 21st century audience.

Other major themes in the spinoff are dehumanization of workers in a capitalistic society and materialism, which are portrayed by the enslaved workers of King Hades’ factory in the underworld.

The show addresses the issue of climate change as well by using weather as a major backdrop of the show.

“The image of the climate being out of whack has been a core one,” Rachel Chavkin, director of the musical, told U.S.-based environmental news magazine Living on Earth.

“As we thought more and more about shaping the world that Eurydice and Orpheus are living in — a world caused, in Greek mythological terms, by the decay of the ancient marriage between Hades and Persephone, a world that is out of balance, where it is either freezing or blazing hot, where food becomes scarce and the idea of stability becomes harder to imagine, and a character, Eurydice, who has spent her life running in search of food and warmth — all of those things kind of crystallized while we were making the show,” she said.

But environmental politics aside, “Hadestown” is a heartwarming musical in a world where we face so much fear amid the unknown — especially amid the Covid-19 pandemic.

Mitchell said through S&Co that "'Hadestown' is one that really speaks to this present moment — it’s a story about hard times, and how people respond to those hard times; sometimes in fear and sometimes in love. And it’s about the necessity of continuing to try even in the face of what feels, at times, futile.”

To Chavkin, the show was about community.

“Power [and the world] tries to make us feel alone, but [it is important] that we can stand [together] and remember that our lover or our friend may be right behind us,” said Chavkin. “I think that will remain true and be of comfort in these horrible times.”

The ending, not to anyone’s surprise, is a sad one.

But the musical does have one small, positive twist. Hidden away in its ending is a lyric that also appeared in the opening, but rings more profoundly the second time around: “It's a sad song, but we sing it anyway, hoping it will turn out different this time.”

The on-stage seven-piece band sounds the train whistle eight times every week, when the Hadestown train takes off on its 150-minute round trip to the underworld with the audience.

“Hadestown” in Korea is in theatres until Feb. 27 at LG Art Center in Gangnam District.