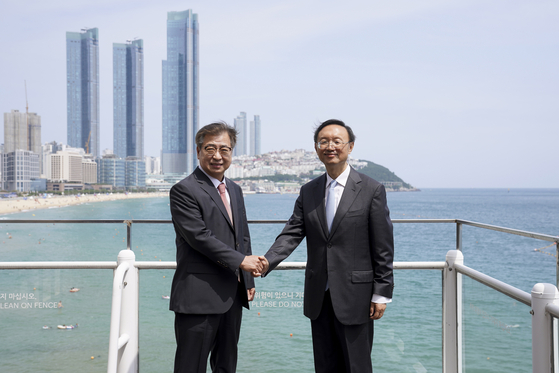 Suh Hoon, left, director of the Blue House National Security Office, shakes hands with Yang Jiechi, a member of the politburo of the Chinese Communist Party, in Busan on Aug. 22, 2020. Suh will visit Tianjin in China over Thursday and Friday to meet with Yang. [BLUE HOUSE]


Suh Hoon, South Korea’s national security adviser, will make a two-day visit to China, said the Blue House Wednesday, amid expectations that Seoul will want to discuss its desire for a declaration to end the 1950-53 Korean War.

Suh, director of the Blue House National Security Office (NSO), will visit Tianjin, a coastal city in northeastern China, to meet with veteran diplomat Yang Jiechi, a member of the politburo of the Chinese Communist Party’s Central Committee.

The two are expected to discuss South Korea-China relations, Korean Peninsula issues and other regional and international affairs, according to the Blue House.

During the talks, Suh is expected to brief Yang, also director of China’s Office of the Foreign Affairs Commission, on Seoul’s push for an end-of-war declaration and explain the progress in discussions of such plans with the United States.

Suh could ask for China's help in drawing North Korea back to dialogue ahead of next year’s Beijing Winter Olympics.

They could also discuss a visit by President Moon Jae-in to attend the opening ceremony of the Beijing Olympics next February. Seoul has considered the Winter Games as an ideal venue to revive diplomacy with Pyongyang after denuclearization talks collapsed in 2019.

Other topics of discussion could include a visit by Chinese President Xi Jinping to South Korea and resolving supply chain issues.

In an address to the United Nations General Assembly in New York in September, Moon proposed that the two Koreas, the United States, and possibly China formally declare an end to the Korean War, which ended with an armistice agreement rather than a peace treaty.

Seoul officials have said that the two sides are in the final stages of talks with Washington over an end-of-war declaration and indicated there have been considerable discussions over a draft text.

Washington initially indicated it may not be completely on the same page as Seoul. U.S. National Security Adviser Jake Sullivan said South Korea and the United States may have "different perspectives" on the precise sequence, timing and conditions in regard to Seoul's proposed end-of-war declaration in a press briefing on Oct. 26.

But Sherman said in a press conference on Nov. 17 after bilateral talks with Choi the day before, “Whenever we all consult and coordinate with each other, we always come out with a good result that ensures the interests of each of our countries.”

Park Soo-hyun, senior Blue House secretary for public communication, told the News Tomato, a YouTube media channel, Tuesday on Suh’s trip to China, “There will be a message to send to North Korea.”

He also conveyed hopes that "North Korea will also come to the dialogue table and discuss [an end-of-war declaration].”

North Korea has been urging the United States to withdraw its “hostile policy” and “double standards” as preconditions for a return to dialogue, referring to sanctions and joint military exercises. However, Pyongyang may lend an ear to Beijing if China takes on a more assertive role in encouraging a return to negotiations.

Ahead of Suh’s visit, Liu Jinsong, director-general of the Chinese Foreign Ministry’s Department of Asian Affairs, held talks with Jung Hyun-woo, a senior official with the North Korean embassy in Beijing, according to China’s Foreign Ministry.

Suh is returning a visit by Yang to South Korea in August 2020.